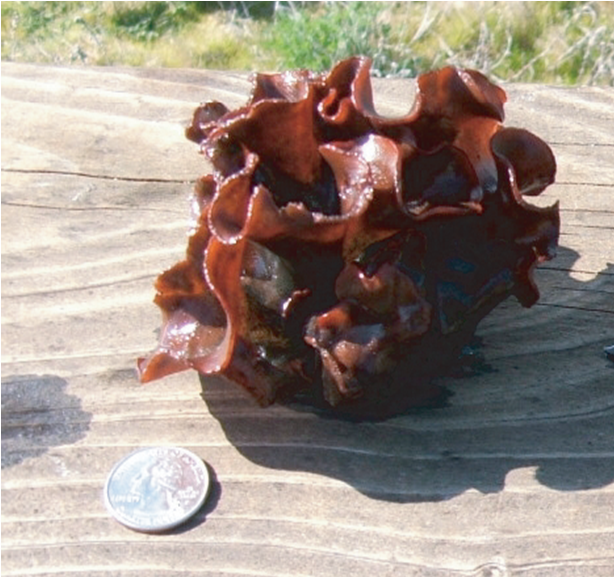 Watersipora (here called n. sp.) is a new species which was identified from California harbors using molecular methods. Its origin and worldwide range are unknown, but its spotty distribution on the California coast is suggestive of being introduced. Aside from the California records, it has been collected from one location in South Korea. It is an encrusting calcified bryozoan known from rocks, pilings, floats and fouling plates. Because it is a newly identified species, knowledge of its impacts is limited. However, it has been found overgrowing large areas in some bays/harbors and experimental plate data show that the three-dimensional structure created by Watersipora n. sp. may increase local diversity in the fouling community.

In a worldwide survey of the genus, Watersipora n. sp. was found in only one location outside California, in Namhae Sangju, on Namhaedo Island, on the south coast of South Korea (Mackie et al. 2012). It is unclear whether this species is native or introduced there.

NOTE: A recent revision of the taxonomy of the genus Watersipora presented a drastic change in the nomenclature and worldwide biogeography of the genus. According to Vieira et al. (2015), W. subtorquata is absent from the West Coast of North America. On their map, the 3 species on the West Coast are W. subatra, W. atrofusca, and W. arcuata. Watersipora subatra occurs in the Western Pacific from Japan to New Zealand, while W. subatra was identified only from California and Pacific Mexico. Watersipora subtorquata is widely distributed in the tropical subtropical Atlantic and Mediterranean, Red Sea, and Indo-West Pacific. Another previously identified species W. subovoidea has been abolished and partially synonymized with an earlier name, until recently regarded as obsolete, W. cucullata (Vieira et al. 2015). This worldwide revision of the genus is at odds with current molecular studies (Mackie et al. 2006; Mackie et al. 2012). Vieira et al.'s (2015) map includes only a small number of West Coast samples. A larger regional sample will be required to reconcile morphological and molecular taxonomy of Watersipora on the West Coast of North America. Until this is available, we will use the names W. subtorquata and W. n. sp. in NEMESIS.

Life History- Watersipora n. sp. is an encrusting calcified bryozoan, a colony composed of many individual zooids. The zooids feed by extending the ciliated tentacles of the lophophore as a funnel, creating a current, and driving food particles into their mouths. The food is guided along the tentacles and through the pharynx by the cilia. Larger food particles can be moved or captured by flicking or contracting the tentacles (Barnes 1983). Larvae of Watersipora spp. are lecithotrophic, and have a short planktonic period (less than 1 day, Mackie et al. 2006). Larvae settle on a substrate and metamorphose into the first zooid of a colony, an ancestrula (Barnes 1983).

Competition - Watersipora n. sp. is a newly identified and still undescribed species, so knowledge of its ecology and impacts is limited. However, it was found to monopolize sites in Morro Bay, Bodega Bay, and Humboldt Bay, California (Geller et al. 2008; Wilson 2011).

Habitat Change- After spreading over surfaces, Watersipora n. sp. colonies in Humboldt Bay, California grew upwards and formed a three-dimensional structure which was utilized by a variety of organisms, increasing diversity on experimental plates (Wilson 2011).