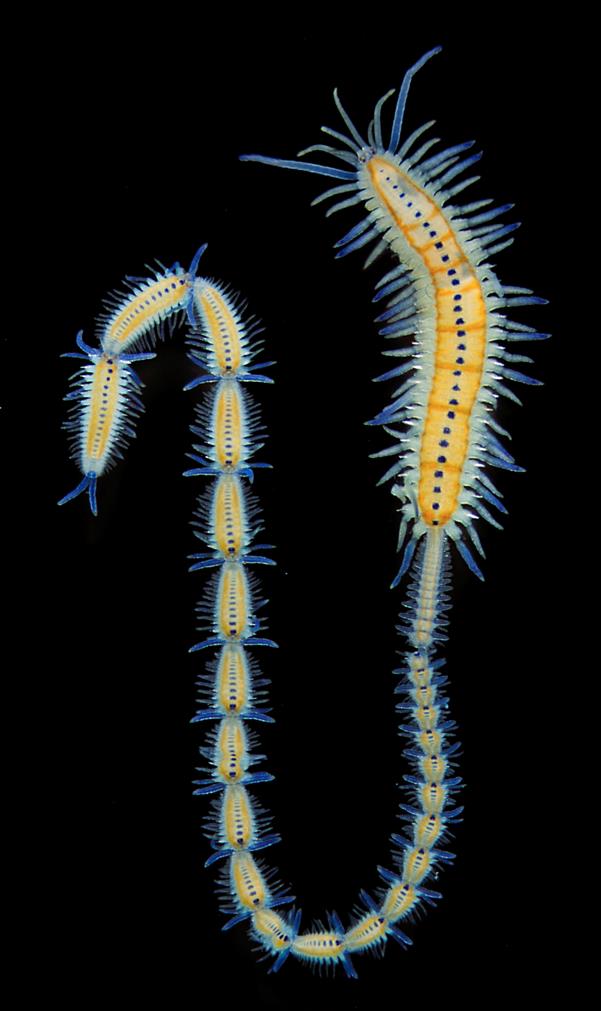 Myrianida pachycera is a marine polychaete which belongs to the Syllidae family. It is frequently photographed because of its bright colors and unusual appearance. It was first described from Shark Bay, Australia and is believed to be native to the Indo-Pacific. Populations in Hawaii are considered introduced and other non-native locations include California and Florida. It occurs in warm-temperate to tropical climates and can be found in a variety of habitats including rocky reefs, oyster beds, coral reefs, muddy-silty bottoms, marinas, docks, and ships’ hulls. No economic or ecological impacts have been reported for this species.

Myrianida pachycera was described from Shark Bay, Australia. It is known form New South Wales (http://australianmuseum.net.au/image/Myrianida-pachycera/), the Seychelles (Böggemann et al. 2003), China (Huang 2001), and from the southern coast of Japan (Imajima et al. 1996b). Occurrences of this polychaete in Hawaii, California, and Florida probably represent introductions by shipping (Cohen et al. 2002; Nygren 2004; Imajima 1996b). This worm is frequently photographed, because of its bright colors and unusual appearance.

Myrianida pachycera was collected in the Indian River Lagoon, southern Florida, in 1997, in intertidal oyster beds (Nygren 2004). A specimen was photographed in the lagoon in 2013 by Dean Janiak (http://www.flickriver.com/photos/top_down/9429696118/), so this worm is presumed to be established in the Lagoon. Again, ship fouling or ballast water are likely vectors.

In 2016, three specimens of M. pachycera were found on fouling plates at Puerto Ayora, on Santa Cruz Island in the Galapagos Islands (Keppel et al. 2019).

Myrianida pachycera, in the atokous (non-reproductive) stage, is slender, and tapered posteriorly, with the ventral surface flattened and the dorsal surface arched. The prostomium has four eyes, arranged in a trapezoid, and bears three antennae, one located medially. The median antenna extends back to the 8th chaetiger. The lateral antennae are about half as long as the median antenna. The palps are small, directed ventrally, and fused at the base. The anterior-most segment (peristomium) bears two pairs of tentacular cirri. The antennae and the first two pairs of tentacular cirri, and the first pair of dorsal cirri, are longer than the cirri on the subsequent segments. The nuchal organs are grooves extending from the posterior end of the prostomium to chaetigers 4 to 7. The proboscis is S-shaped and ends in 9 soft papillae. It contains a ring (trepan) of 11–16 large teeth and 26–28 smaller teeth. The proventricle extends to chaetigers segment 8–10 or to 11–13. The cirri behind the first pair are shorter, broad, and blade-like, about as long as the body-width. The parapodia each bear two bundles of chaetae, much shorter than the cirri. The atokous section, or the last stolon, ends in a pygidium which terminates in a pair of anal cirri. The atokous section is 40–60 mm long, and often with an equal or greater length of stolons. This worm is brilliantly colored, with red eyes, bright-blue cirri, light blue parapodia, and a bright-orange central region. Except for a few anterior setigers, most have a bright blue dot in the center of each segment (Imajima 1966b; Nygren 2004).

The epitokous stages break off from the chain of stolons and according to the sex of the worm, develop into morphologically distinct male ('polybostrichus') and female ('sacconereis') forms. These develop new heads with three antennae and one pair of tentacular cirri. The parapodia of the chaetigers bear two bundles of long swimming chaetae. A preserved male specimen was 2.4 mm long, with 22 chaetigers (Nygren 2004), while females were 5–6 mm, with 31–35 setigers (Imajima 1996b; Nygren 2004). The female stages, early in development, are packed with ova, and later carry an external egg mass on their ventral surface (Imajima 1996b; Nygren 2014).

It is a favorite subject for photography because of its bright colors and long chains of stolons. One picture of this worm, by Dr. Greg Rouse, won 2nd place in a 2003 Nikon photomicrography contest (http://www.nikonsmallworld.com/galleries/entry/2003-photomicrography-competition/2)

Myrianida pachycera, like other members of the Syllidae, reproduces by epitoky. During epitoky the worm undergoes stolonization, in which segments of the body become modified for carrying gametes and swimming (modified setae, enlarged eyes). Sexes are separate, and the stolons break off from the stem portion of the worm's body, and swim in the water column as epitokes, with new heads, three antennae, and well-developed eyes. The stolons then regenerate. Male and female stolons are morphologically distinguishable (Imajima 1966b; Nygren 2004). The details of fertilization are not known, but the female carries the fertilized eggs in a long ventral egg mass while swimming in the water column (Imajima 1966b). Details of development are not known but in the related genus?Autolytus, the larvae are brooded and are lecithotrophic (Pettibone 1963).

Myrianida pachycera?occurs in warm-temperate to tropical climates, in the intertidal and shallow subtidal zone. It can be found in a variety of habitats including rocky reefs, oyster beds, coral reefs, muddy-silty bottoms, marinas, docks and ships’ hulls (Imajima 1966b; Nygren 2004; Carlton and Eldredge 2009). Syllids have been considered exclusively carnivorous, including members of the subfamily Autolytinae (including?Myrianida) feeding largely on hydroids (Fauchald and Jumars 1979). However, studies of fecal pellet of syllids indicate that many are omnivorous, including one species of?Autolytus (Giangrande et al. 2000).