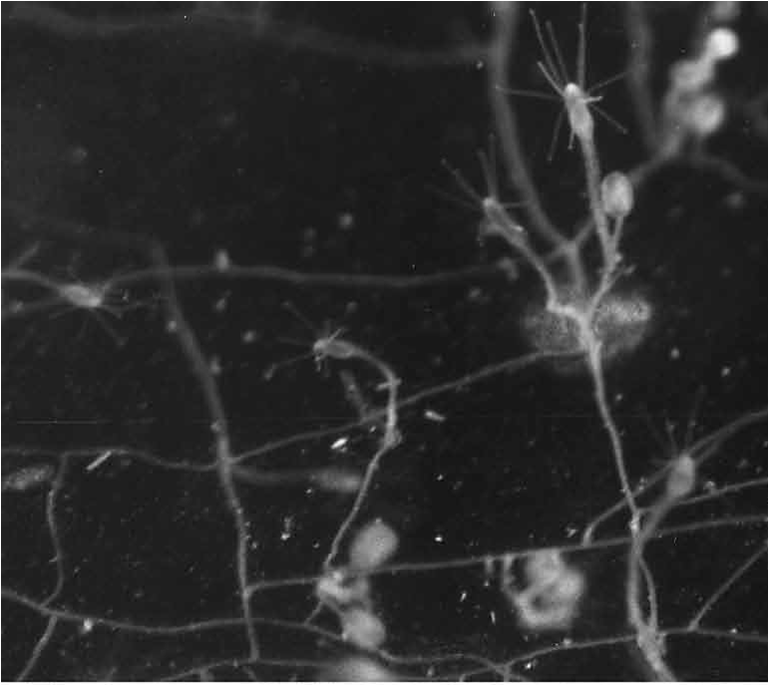 The hydrozoan Amphinema rugosum is widespread in the North Atlantic but was apparently absent in the East Pacific. Possibly conspecific hydroids were collected from buoys and docks on San Cristobal Island in the Galapagos Archipelago in 2018, and as single colonies from Bodega Harbor, California in 1998, and from a former fishpond on Oahu in the Hawaii Islands in 2009.  The medusa has not been reported from the East or central Pacific. These scattered occurrences represent introductions by fouling or ballast water.

Amphinema rugosum is a hydrozoan with inconspicuous polyps,1-3.5 mm high, growing from a network of stolons, and a more conspicuous medusa, 5-6 mm diameter (Schuchert 2007). This hydrozoan is widely distributed in the North Atlantic, Indian Ocean, and western Pacific (Kramp 1958; Schuchenrt 2007). However, it has not been reported from the Eastern Pacific except for uncertain identifications from the Galapagos Islands (as Amphinema cf, rugonsum (Calder et al. 2019) and a colony collected and cultivated from Bodega Harbor, California (Amphinema sp. 1, Rees 2000). Another isolated specimen of Amphinema, similar to the one from Bodega Harbor was found on Oahu, Hawaii (Calder et al. 2010).

The unidentified hydrozoan Amphinema sp.1 is known from one specimen collected in 1998 in Bodega Harbor and grown in culture (Rees 2000). Several lines of evidence, including the previous absence of hydroids of this genus in shallow water in central California, absence in previous surveys, presence on artificial substrates, and association with other exotic organisms, support introduced status in California. Since only a single specimen is known so far, its establishment is unknown. Similar species (A. dinema, A. rugosum) are known to have wide ranges in the world's oceans but have not been collected from the Eastern Pacific (Rees 2000). A similar hydroid, again only a single specimen, was collected for the first time in Hawaii in 2009 in shallow water in Oahu, Hawaii (Calder 2009).

Calder (2009) collected one colony of an unidentified Amphinema sp., resembling the Bodega Harbor form, in shallow water at the mouth of Kuapa Pond, an inlet in Hawaii Kai, east of Honolulu. The hydroid was growing on an oyster shell. This is the first record of this genus from Hawaii, whether it is established is unknown.

Invasion history elsewhere in the world is not summarized for this species at this time.

Hydrozoans resembling Amphinema rugosum have been collected from the Eastern Pacific in Bodega Harbor, California (Amphinema sp. 1, Rees 2000) and San Cristóbal, in the Galapagos Islands (Amphinema c.f. rugosum, Carlton et al. 2021). The Bodega Harbor Amphinema had hydroids resembling A. rugosum, but medusae resembling A. dinema. (Rees 2000). The medusae of the Galapagos form has not been described. Here the two forms will be treated as conspecific with, or closely related to, Amphinema rugosum, as described by Schuchert (2007).

The hydroids of Amphinema sp. have creeping stolons with upright polyps arising from them. The upright branches contain one or two polyps and protrude 2-3 mm above the stolon. The polyps are mounted on pedicels, at the base of which are 2-5 rings. Medusa buds develop directly from the stolons, as well as from the upright branches. The polyps have cylindrical bodies and two whorls of 8-10 thread-like tentacles, the upper circle held upright, and the lower at right angles to the hydranth wall. Field and laboratory colonies had more than 100 polyps. When disturbed, hydroids of the genus Amphinema flex, bending nearly 180 degrees toward the substrate. The stolons and polyps are bright orange red in color (description from: Rees 2000; Mills et al. in Carlton 2007; Schuchert 2007; Carlton et al. 2021).

The unidentified hydrozoan Amphinema sp. 1 is known from a single specimen collected from Bodega Harbor in 1998 and cultured by John T. Rees (2000). This hydroid released medusae in culture. Both hydroids and medusae were distinct from previously known Amphinema.

The hydrozoans from Bodega Harbor and cultivated by Rees (2000) released medusae about ~1.0 mm in size and developed as they grew. Initially, they had thin jelly, no apical projection, and two opposite tentacles, each with a flat tentacle bulb. There were also two opposed rudimentary marginal bulbs without tentacles, four radial canals, and 1-4 interradial warts along the bell margin. The manubrium was simple and extended about halfway down the subumbrellar cavity. The outer surface of the umbrella was sprinkled with nematocysts. The tentacles when contracted were held coiled up against the bell. Mature medusae, 4-8 weeks old, were about 2.5-3.5 mm in diameter with a large, conical apical projection and enlarged rose-colored tentacle bulbs, extending upwards onto the bell along the radial canals. Their tentacles could extend to 50 mm. The manubrium developed four prominent lips, forming a cross-like outline with a greenish tinge. Gonads formed on the upper half of the manubrium. All the cultured medusae were male and lacked eggs (description from: Rees 2000; Mills et al. in Carlton 2007). The hydroid of Amphinema sp. from Bodega Harbor resembles that of Amphinema rugosum, while the medusa is most similar to that of A. dinema among the known species of the genus (Rees 2000).

The hydroid of A. rugosum differs from the Bodega Amphinema sp. in a number of ways, including having medusa buds only on the stolons; always having annulations at the base of the hydrocaulus; and having the upper end of the uprights delicate and membranous instead of well-defined (Rees 2000). The medusae of A. dinema and A. rugosum differ from Amphinema sp. in coloration, while A. rugosum differs from the other two in having prominent folds in its gonads, and tentaculae (small tentacles) along the bell margin (Rees 2000). Both named species have a wide distribution in the Mediterranean, Atlantic, and Indo-Pacific, but are not known from the Northeast Pacific (Rees 2000; Bouillon et al. 2004; Mills et al. in Carlton 2007). Calder (2010) described a very similar unidentified hydroid from Oahu Hawaii but did not obtain the medusae. Arai and Brinckmann-Voss (1983) described A. platyhedos from depths below 350m off British Columbia, but this species is distinct. Rees (2000) suggests that a record by Wrobell and Mills (1998, cited by Rees 2000), reported to be A. platyhedos from shallow water in California presents a third Northeast Pacific species. The scarcity of specimens and the few descriptions of hydroids and medusae of the same species of Amphinema make the taxonomy of this species incomplete and uncertain.

Amphinema rugosum colonies grow as sessile polyps extending from a creeping stolon attached to a hard substrate. The polyps and stolons asexually produce buds, which break off as small, swimming medusae. The planktonic medusae feed on zooplankton. Rees' medusae were all male, indicating that the sexes may be separate between colonies (Rees 2000). Typically, planktonic medusae release eggs and sperm into the water column, which fuse to form ciliated planula larvae. The planula larvae settle on suitable substrate and develop into a hydroid (Barnes 1983). The colony of Amphinema sp. found in Bodega Harbor was growing on a bryozoan colony (Watersipora sp.) which was fouling a floating marina dock (Rees 2000). Colonies on San Cristobal Island in the Galapagos were growing on buoys and a dock (Calder et al. 2021). A colony in a former fishpond on Oahu was growing on a bivalve shell (Calder 2010).

The unidentified hydrozoan Amphinema sp. has had no known impacts in West Coast or Hawaiian waters.

Calder, Dale R. and 8 authors (2021) Additions to the hydroids (Cnidaria, Hydrozoa) of marine fouling communities on the mainland of Ecuador and in the Galapagos Islands, Aquatic Invasions 16: 208-252