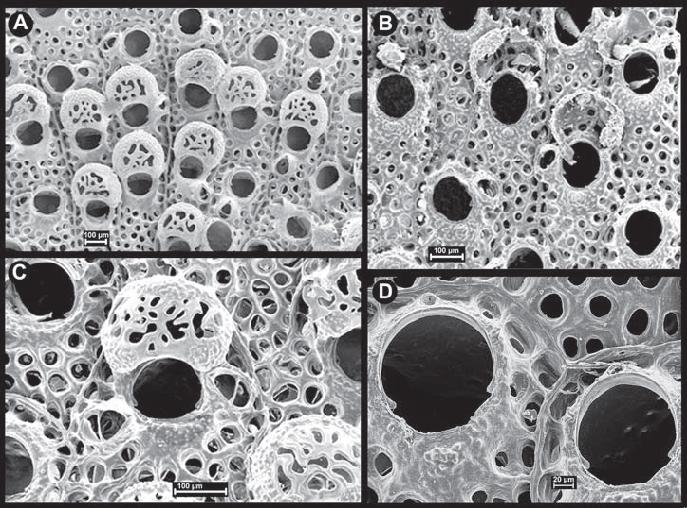 Hippoporina indica is an encrusting bryozoan native to India and China. It has been introduced to the East and Gulf Coasts of the United States, Belize, Puerto Rico, and the Caribbean and Pacific coasts of Panama, near the Panama Canal. It has been reported on PVC settling plates, fishing rafts, fish cages, buoys, oysters, and barnacle shells. In its native range it is a dominant fouling organism growing on aquaculture equipment and overgrowing other invertebrate species; however, no negative impacts have been reported for H. indica in its introduced range.

The encrusting bryozoan Hippoporina indica was described from Bombay, India, on the Arabian Sea, by Madhavan Pillai (1978). An apparently identical bryozoan was described from Hong Kong, China as Cosciniopsis hongkongensis by Liu and Li in 1987, and had been present there at least as early as the 1960s (Liu and Li 1987). In fouling-plate surveys conducted by the Marine Invasions Laboratory of the Smithsonian Environmental Research Center (SERC) in 2001-2008, H. indica was found in East and Gulf Coast ports of the US from Virginia to Texas, in Belize and Puerto Rico in the Caribbean Sea, and on the Caribbean and Pacific coasts of Panama, near the Panama Canal (McCann et al. 2007, Ruiz et al., unpublished data).

Hippoporina indica was first found on the East Coast in the summer of 2001, on fouling plates in Chesapeake Bay, Virginia, and near Jacksonville, Florida (McCann et al. 2007, Ruiz et al., unpublished data). The Virginia records consisted of one specimen each at three sites in Norfolk (Nauticus and Willoughby Bay) and Virginia Beach (Lynnhaven Bay), but this bryozoan was well-established at sites further south. It was found in 2004 at most or all sites with plates in Charleston, and in 2005 it was found at seven sites near Fort Pierce, Florida, in the Indian River Lagoon. In the St. Johns River estuary, where salinity was variable, H. indica was limited to high salinity sites (in 2001, McCann et al. 2007).

In later SERC sampling, Hippoporina indica was found in Belize in 2005, and in marine waters at the Caribbean and Pacific ends of the Panama Canal (2004 and 2008, respectively) (Ruiz et al., unpublished data).

Hippoporina indica forms encrusting colonies. The zooids are short, rectangular, and variable in size (mean zooid length = 0.37 mm, mean zooid width = 0.27 mm, N=65; McCann et al. 2007). The frontal surfaces of the zooids have large marginal and frontal pores except for a granular unperforated central portion of frontal wall adjacent to the orifice. Up to three spines occur above the orifice; they are usually lost early in colony development, but the spine bases sometimes remain visible. The orifice is large relative to the zooid size. It is hoof-shaped, with a sub-circular anterior region and a shallowly convex proximal region. The two regions are separated by triangular, proximally slanting, hinging denticles. The granular calcification below the orifice is raised into a low peristome with a central peak. The orifice sometimes has two lateral processes on the rim. On one or both sides of the orifice, there are large umbos supporting avicularia (some zooids may have up to three avicularia, many zooids have none). These are rounded proximally, with narrow crossbars and short, pointed, triangular mandibles, and oriented laterally or disto-laterally toward the orifice. Similar triangular avicularia may also occur on lateral margins or frontal surfaces of the zooids. The ovicell is hyperstomial (partially embedded in the distal zooid, but with an opening above the mother cell), with granular calcification and irregular pores (in size, shape, and spacing) covering most of its frontal surface (Description from McCann et al. 2007).

Life History- Hippoporina indica is an encrusting, calcified bryozoan colony composed of many individual zooids. The zooids feed by extending the ciliated tentacles of the lophophore as a funnel, creating a current, and driving food particles into their mouths. The food is guided along the tentacles and through the pharynx by the cilia. Larger food particles can be moved or captured by flicking or contracting the tentacles (Barnes 1983). Hippoporina indica belongs to a taxonomic group which has lecithotrophic larvae with a short planktonic period (less than 1 day, Hayward and Ryland 1998). Larvae settle on a substrate and metamorphose into the first zooid of a colony, an ancestrula (Hayward and Ryland 1998).

Ecology- In addition to PVC fouling plates, H. indica has been recorded from fishing rafts, fish cages, buoys, oysters, and barnacle shells in China (Lui and Li 1987, cited by McCann et al. 2007). It seems to be confined to waters of marine salinity (McCann et al. 2007).

Shipping, fisheries- Hippoporina indica has been reported as a dominant fouling bryozoan in many areas of Hong Kong, found on fouling panels, ships, buoys, and in aquaculture facilities (Li, 1989).

Competition- In India, its native range, Hippoporina indica grew more slowly than Arbopercula bengalensis, and Sinoflustra annae, two other bryozoans which have also been introduced to Southeast and Gulf Coast estuaries. Hippopornia indica persisted, however, owing to its greater longevity and ability to overgrow other species (Karande and Udhayakumar 1992).

Karande, A. A.; Udhayakumar, M. (1992) Consequences of crowding on life-histories of cheilostome bryozoans in Bombay., Indian Journal of Marine Science 21: 133-136