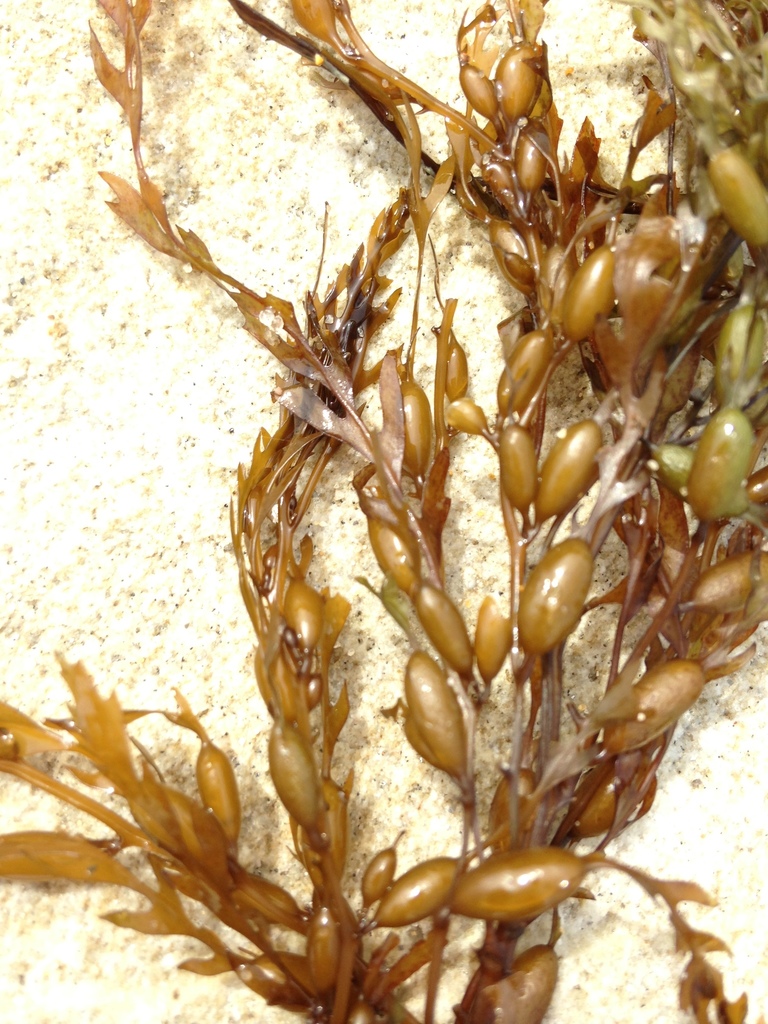 Sargassum horneri is a large and conspicuous brown seaweed. It has a broad native range in the Western Pacific spanning from Northern Japan to the Philippines. It is introduced on the West Coast of North America where it ranges from the Channel Islands, California to Guadalupe Island, Mexico. It grows attached to hard substrates in the shallow subtidal, but can also occur in large floating mats. Vectors for its introduction include ballast water or hull-fouling on commercial ships or recreational boats. There are no known ecological or economic impacts for this species; however, it has the potential to be major habitat engineer because of its rapid growth and large size.

Image Credit: jnotar and www.inaturalist.org through the CC BY-NC license.

Sargassum horneri has a broad native range in the Northwest Pacific, from Hokkaido, Japan to the Philippines (Hu et al. 2011, Guiry and Guiry 2016). It grows mostly in subtidal waters of 3-15 m, but can grow intertidally and can form large floating mats in the seas off Japan, China and Korea (Abe et al. 2013; Gao and Hua 1997; Yoshida et al. 2004). In 2003, it was first identified in Los Angeles Harbor, California and has expanded its range north to the northern Channel Islands and south to Isla Natividad, Baja California (Miller et al. 2007; Riosmena-Rodríguez et al. 2012; Marks et al. 2015; Kaplanis et al. 2016).

Sargassum horneri was first noted in Los Angeles Harbor in October 2003, and was found to have spread from the inner harbor to the channel by October 2005. In 2006, it was collected on Santa Catalina Island (Miller et al. 2007). Its range on the southern California coast has expanded rapidly, reaching Redondo Beach by 2004, Point Loma, San Diego by 2006 (Marks et al. 2015), and Todos Santos Bay, Baja California by 2005 (Aguilar-Rosas et al. 2007). By 2009, S. horneri had reached Anacapa and Santa Cruz Islands, in the northern Channel Islands (Marks et al. 2015) and Isla Natividad, Baja California, Mexico (Riosmena-Rodríguez et al. 2012). Many of the harbors of coastal southern California, from Port Hueneme (California Department of Fish and Wildlife 2014) to San Diego Bay were colonized by 2013 (Marks et al. 2015). Its range now covers 950 km on the California and Mexico coastline (Kaplanis et al. 2016). It has been reported from Guadalupe Island, 241 km off of Baja California (Bushing 2014). Almost all of the occurrences of S. horneri have been subtidal, with greatest abundance at 3-5 m (Marks 2015), but a few plants have been found in the lower intertidal (Anonymous 2009). Sargassum horneri was probably transported to Los Angeles by fouling or ballast water, while recreational boats are probably responsible for the subsequent spread to smaller harbors (Miller et al. 2007; Marks et al. 2015; Kaplanis et al. 2016).

Sargassum horneri usually grows erect, attached by a solid holdfast, but can also form free-floating mats. Young plants resemble ferns, with opposite leaf-like blades, extending from a central axis. The blades have broad, deeply incised, ragged tips. As the plant grows, it becomes a single frond, loosely branched, in a zigzag pattern. Once it matures, the blades become narrower and the branches develop small, ellipsoidal air bladders and larger spindle-shaped reproductive receptacles, both on stalks. The airbladders keep the seaweeds upright in the water column. Plants in California range between 0.3-1.5 m tall (Miller et al. 2007; Uwai et al. 2009; Marks 2015; Marks et al. 2015). At some locations in Japan, plants can reach 2.5-5 in height (Yoshida et al. 2004).

The taxonomy of Sargassum horneri has been complicated by morphological, life-history, and genetic differences among populations. Specimens with spherical to elliptical reproductive receptacles were known as S. filicinum, while those with spindle-shaped receptacles were classified as S. horneri. Genetic studies have indicated that these forms are conspecific (Uwai et al. 2009), but that Asian populations consist of five clades, one of which is confined to Chinese coastal seas, while the other four are broadly distributed through the southwest Pacific. Oceanic drifting of large rafts of these seaweeds facilitates genetic exchange (Hu et al. 2011).

Sargassum muticum
Sargassum muticum has a bushy form and can have multiple stems. Blades are oval and smooth, or toothed. Air bladders are spherical or oval, and receptacles are club-shaped. Plants can reach up to 10 m long, but are more usually 1-2 m (Scagel 1956; Cohen 2005).

Mature Sargassum horneri plants produce receptacles, specialized structures for the production of gametes. Populations of Japanese plants varied in their seasonality, producing receptacles in fall, winter or spring, but matured at an average of 150 to 250 mm length (Yoshida et al. 2004). Most populations of S. horneri are dioecious (Umezaki 1984; Choi et al. 2008), but introduced populations in the Eastern Pacific are monecious and are capable of self-fertilization (Marks 2015). Eggs are fertilized in the receptacles and are released into the water. An average plant 100 cm long discharges about 3 million eggs (Umezaki 1984). The fertilized zygotes, when settled on a suitable surface, develop rhizoids, at about 1 mm diameter (Ogawa 1986; Uchida 1993; Choi et al. 2008). Early germlings develop fernlike fronds. As the plant grows beyond 20-30 mm diameter, it develops branches, and smaller, ragged-tipped blades (Uchida 1993).

Sargassum horneri grows over a wide latitudinal range, from cold-temperate to tropical conditions. This species shows a high degree of regional and local genetic diversity, which may, in part, account for its wide geographical and ecological range (Yoshida et al. 2004; Hu et al. 2011). Germlings from Korea grew well at 15-25°C, while adults had a smaller range of 10-15°C (Choi et al. 2008). Growth rates of germlings were not greatly affected by light intensity and grew about equally well at short (8h Light), long (16h L), and 24 h L photoperiods, while adult plants grew best at long photoperiods, and badly at 24 h, corresponding with the reproductive season of this population (Choi et al. 2008). Germlings grew at 23 to 42 PSU, with an optimum of 32 PSU (Ogawa 1986). Developmental rate and outcome vary with photoperiod. Plants kept under short-day conditions grew to ~140 cm in 100 days and then developed receptacles 27-45 days after transfer to long-day conditions. Dioecious plants with either male or female receptacles were about 1500 to 2500 mm long (Uchida 1993). Shoots became elongated under short-day conditions, while receptacles formed under long-day photoperiods, or when plants were transferred from short-day to long-day photoperiods (Uchida 1993). After the release of gametes, growth ceases, and the plants senesce and disintegrate. As this happens, germlings and juvenile plants appear (Gao and Hua 1997). Even within a single bay (Hiroshima Bay), S. horneri, showed a great diversity of seasonality and growth patterns. Different populations released gametes in autumn, winter, and spring. Growth was affected somewhat by differences in sedimentation, but transplants showed that most of the differences between populations were genetic (Yoshida et al. 2004).

To our knowledge, this seaweed has not been reported in estuarine salinities. Sargassum horneri is commonly known from rocky habitats (Yoshida et al. 2004). In southern California harbors, it is abundant on riprap walls within harbors, but rare on exposed jetties outside harbors, or on exposed coastlines. It is primarily known from shallow subtidal depths (1-5 m) (Kaplanis et al. 2016), but is also found in the lower rocky intertidal in Baja California, and at Laguna Beach, California. The extent to which it uses man-made structures is unclear, but it has been found on a seawater intake pipe (Miller et al. 2007) and on fouling panels (Woods Hole Oceanographic Institution 1952). In its native range, S. horneri, in addition to being part of the coastal flora, also has a major role in the open sea, where it can form floating mats. These were small compared to the Atlantic Sargasso Sea mats of S. natans, weighing 11 kg wet weight, or less, but constitute an important habitat for invertebrates and juvenile fishes in the East China Sea (Abe et al. 2013, Komatsu 2014). Along the West Coast of North America, the ability of S. horneri to survive for long periods of time (4-14 weeks) after being detached has contributed to its rapid dispersal, but extensive algal mats have not yet been reported. Growth experiments sugges that temperatures above ;25 ° C, or below 10 ° C will slow, but not stop the northward and southward spread of S. horneri.(Small and Edwards 2021).

Sargassum horneri is a large conspicuous seaweed, with no reported economic or ecological impacts. However, it has the potential to be major habitat engineer because of its rapid growth and large size. Limited information on its impacts in California and Mexico are based on qualitative observations by divers (Bushing 2014). Experimental studies have not yet been published, to our knowledge. In the winter of 2015, off Catalina Island, divers carried out hand and mechanical removal, extracting about 9,000 pounds of the alga from nearly one square kilometer. Some of those assisting with the removal tried making beer and soap with Sargassum in hopes of increasing awareness and potentially finding a commercial appetite for it (NOAA 2015). In Japan, boiled S. horneri, known as 'Akamoku', is consumed locally, but has also been studied for wider commercial marketing (Shinohara et al. 2009).

Riosmena-Rodríguez, Rafael and 5 authors (2012) The invasive seaweed Sargassum filicinum (Fucales, Phaeophyceae) is on the move along the Mexican Pacific coastline, Botanica Marina 55(5): 547-551