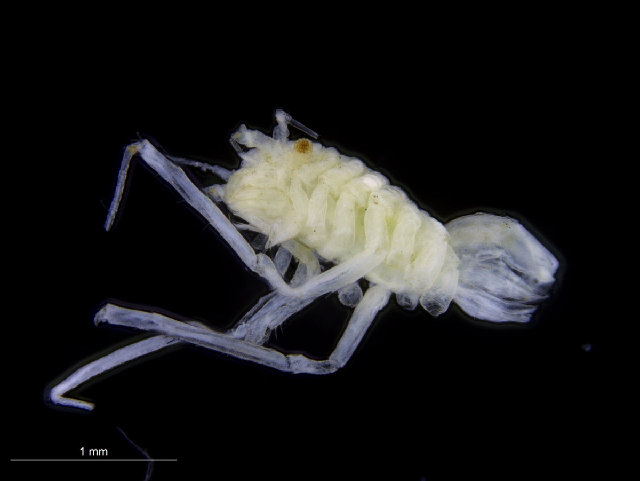 Uromunna sp. A is a small (1-2 mm) isopod found in brackish-to-fresh waters in the San Francisco estuary, California. The true identity of this species is unknown and therefore so is its native range, but its relatively recent discovery (1989) suggests that it is non-native to California. Isopods of the genus Uromunna are found in estuarine, shallow, and deep marine habitats, often associated with algae, vegetation, fauna, or rocks. There are no ecological or economic impacts reported for this species.

Isopods of the genus Uromunna (~ 20 species) range widely throughout the world’s oceans, including a wide span of latitude, depths, and habitats (Schultz 1969; Brusca and Coeljo 2007; Appeltans et al. 2015). Many of the species of Uromunna appear to occur in intertidal to shallow subtidal waters, ranging from marine to estuarine habitats (Kensley et al. 1996). The identity of the abundant Uromunna sp. A (=Munna sp. A). occurring in the Sacramento-San Joaquin Delta, is unknown. The native species of Munna (5 spp.) and Uromunna (U. ubiquita) listed by Brusca and Coeljo (2007) for California are all marine, and do not occur in brackish water, such as Suisun Bay. Uromunna sp. A was first reported from the Sacramento-San Joaquin Delta in 1989 (Light et al. 2005).

The origin of this estuarine Uromunna sp. is unknown, but estuarine and shallow intertidal species have been recorded from many parts of the world. Uromanna reynoldsi was described from estuaries in Georgia, and subsequently found on the Florida Gulf Coast (Anclote River); Lake Pontchartrain, Louisiana; near Sabine Lake, Texas; and from the freshwater Gatun and Miraflores locks on the Panama Canal (Frankenberg and Menzies 1966; Callahan et al. 1977; Schultz 1979, U.S. National Museum of Natural History 2015). The Panama Canal collections were the first record of an established population of a munnid isopod in freshwater (Schultz 1979). Several other species have been reported from estuarine environments, but we have little information on the salinity range of most of these isopods. García-Guerrero and Hendrickx (2005) found an unidentified species in the Urias Lagoon, Gulf of California, at 8-43 PSU, but this form was most abundant at 31-41 PSU. Faasse and Ligthart (2013) found an unidentified Uromunna sp. in marine seagrass beds in the Netherlands, and considered it a likely introduction there. Isopods of this size are easily overlooked, and it is possible that several species are capable of invading tidal brackish and freshwater regions such as the Delta.

The earliest record of Uromunna sp. A in the San Francisco estuary was given as 1989 by Light et al. (2005) and as 1993 by Cohen and Carlton (1995). The records are predominantly from low-salinity areas, 0-10 PSU, in the Delta and the Napa River. Delta locations include Franks Tract, Old River, lower Sacramento River (freshwater), Sherman Lake, Sacramento River, Suisun Bay, and Clifton Court Forebay (Graening and Rogers 2013). It was found in 2004 at the Napa Valley Marina (Cohen et al. 2005) and on the surplus cargo ships stored in Suisun Bay in 2006 (Davidson et al. 2008) and 2010 (Llansó et al. 2011, as U. ubiquita). Ballast water and/or hull fouling are the likeliest mechanisms for the introduction of Uromunna sp. A into the San Francisco estuary. Since this species can breed in freshwater, transport with ornamental aquatic plants is also possible.

An unidentified isopod of the genus Uromunna (=Munna) sp. A. has been collected in the Sacramento-San Joaquin Delta and Suisun Bay, California since 1989 (Light et al. 2005). Cohen and Carlton (1995) listed it with species whose establishment is uncertain, but populations appear to be persistent in the upper San Francisco Bay estuary. A detailed description of Uromunna sp. A is not available, so we use descriptions of several known species, particularly U. reynoldsi, known from brackish and fresh waters of the southeastern US Atlantic and Gulf Coasts and the Panama Canal (Frankenberg and Menzies 1966; Schultz 1969; Schultz 1979). Poore (1984) described three species of Uromunna from Australian estuaries (U. brevicornis, U. humei, U. philipi) and Schultz (1969) illustrated the West Coast native U. ubiquita. Faasse and Ligthart (2015) have illustrated a Uromunna sp. from the Netherlands. The description below is based on common features of these five species. However, a detailed anatomical description and identification of the San Francisco Bay isopod is needed.

The body of Uromunna spp. are roughly oval to elliptical, with a length about 2-4X the width, but the joints between the peraeonites are deeply incised. The 'head' is actually a cephalothorax, representing a fusion of the head and the first thoracic segment. The anterior surface of the cephalon is straight or slightly curved. The eyes protrude slightly, on short immovable peduncles. In Munnidae, the position of the 2 pairs of antennae are apparently reversed, so that Antenna 1 is often slightly posterior to Antenna 2, and is much shorter. Antenna 1 comprises 6 segments. Antenna 2 ranges from about 50% of body length (U. reynoldsi) to ~100% (U. ubiquita). Segments 4 and 5 of Antenna 2 are elongated, with segment 5 followed by a flagellum of 10- 14 segments. In both sexes, Peraeonite 1 is narrower than the others, and bowed posteriorly. In males, the other six peraeonites are roughly equal in thickness, with Peraeonites 2-4 bowed posteriorly and the posterior 3 bowed anteriorly. In females, Peraeonite 3 is greatly expanded and Peraeonites 3-5 are either bowed anteriorly or straight across the body. In some species, pereiopod 2 is sexually dimorphic, with articles 5 and 6 broader in males than those in females. The pleotelson is roughly pear-shaped. The uropods are minute, located anterior to the tip of the pleotelson, with only one ramus visible, tipped with a cluster of setae. Maximum lengths range from 0.74 (U. humei) to 1.5 mm (U. reynoldsi). Male U. reynoldsi have dark chromatophores along the edge of the body. Females have a dark head, and a dark lateral stripe running back to the pleotelson. Description based on: Frankenberg and Menzies 1966, Schultz 1969, and Poore 1984.

Uromunna sp. A has separate sexes, and coupling hooks are located on the maxillipeds. Fertilization is internal and eggs are brooded by the female. Females of U. reynoldsi from the freshwater locks of the Panama Canal carried 6-10 embryos (Schultz 1979), while an unidentified Uromunna sp. from mangroves of the Urias estuary, Mexico carried 9-16 embryos (García-Guerrero and Hendrickx 2005). Embryos develop directly into miniature adults (Schultz 1969).

Uromunna sp. A is known from fresh-brackish waters (0-10 PSU) of the San Francisco estuary (Light et al. 2005; Cohen et al. 2005; Graening and Rogers 2013). It has been reported from hulls of unused ships (Davidson et al. 2008; Llansó et al. 2011) and marinas (Cohen et al. 2005), but we have no information on its occurrence in more natural habitats in the estuary. Another estuarine species, U. reynoldsi, is known to occur at 13-34C and 0-12 PSU in salt-brackish marshes, brackish ponds, and the locks of the Panama Canal (Frankenberg and Menzies 1966; Callahan et al. 1977; Schultz 1979). Uromunna spp. have been found on oak leaves, seagrasses, mangroves, algae, and associated with plant detritus (Frankenberg and Menzies 1966; Callahan 1977; Poore 1984). Likely foods are plant detritus, microalgae, and bacteria.

No impacts have been reported for Uromunna sp. A in the San Francisco Bay estuary.

Poore, Gary C. B. (1984) Redefinition of Munna and Uromunna (Crustacea: Isopoda: Munnidae), with descriptions of five species from coastal Victoria, Proceedings of the Royal Society of Victoria 96(2): 61-81