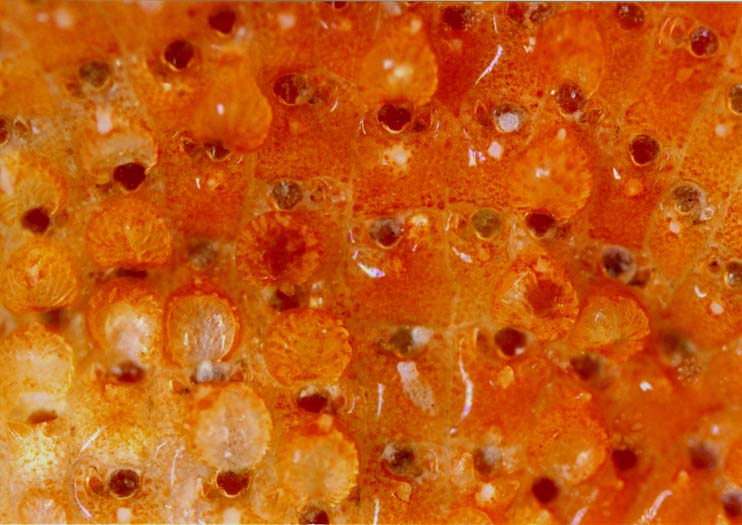 Schizoporella japonica is a heavily calcified encrusting bryozoan which is native to the Northwest Pacific, from China to Northern Japan. Introduced populations are known from the West Coast of North America ranging from Alaska to Point Conception, California. The full extent of its native and introduced range is uncertain because of confusion with S. unicornis, S. errata, and other Schizoporella species. Schizoporella spp. are common fouling organisms and frequently dominate the fouling community on man-made structures such as ships' hulls and docks.

The encrusting bryozoan Schizoporella japonica was first described from Sagami Bay, Japan, as a variety of S. unicornis. It is native to the Northwest Pacific, from China to northern Japan (Dick et al. 2005). However, the extent of its native and introduced ranges is uncertain because of confusion with S. unicornis, S. errata, and other Schizoporella species.

To the north, it has been found in Alaska, from Ketchikan (in 2001, Dick et al. 2005, Ruiz et al., 2006), Sitka (in 2001, Ruiz et al. 2006), and Valdez and Tatilek, Prince William Sound (in 1998, Hines and Ruiz 2000). The southern extent of its range is uncertain. Schizoporella on fouling plates from south of Point Conception (Los Angeles-San Diego) appear to represent a different species (Linda McCann, personal communication).

In February 2011, S. japonica was discovered in fouling communities in Holyhead, Wales. Subsequently, populations were found in the Orkney Islands on the east coast of Scotland, Portavadie on the west coast of Scotland (Ryland et al. 2014) and in the Shetland Islands (Collin et al. 2015). In June-July 2014, this bryozoan was found at Floro, Alesund, and Kristiansund, Norway (61-63 S, Porter et al. 2015).

Schizoporella japonica is a heavily calcified encrusting bryozoan, growing on rocks, shells, and algae. The colonies sometimes form a double layer, due to overgrowth of one colony over another and occasionally form leaf-like lobes free from the substrate. Colonies range in color from whitish pink to deep red and can grow up to 5 cm across. Its zooecia are roughly rectangular, arranged in columns radiating from a center, with distinct grooves at lateral walls. The width of the zooids increases along the column, until a bifurcation point is reached where the zooids are nearly as wide as long. After the bifurcation point, daughter zooids are again narrow and elongate. The frontal wall is somewhat convex, with areolar pores (in circular pits) around the margins, and small pseudopores (not in pits) covering the entire frontal surface. There is often a small umbo (knob) below the orifice. The orifice is broader than long, semicircular on the distal side, with the proximal side separated by a pair of blunt condyles, and forming a broad sinus. The zooecia lack spines and the avicularia may be single, paired, or absent on a zooid. The ovicells are globose, with scattered small pores, and resting on the frontal walls of zooids. They may have a calcified, rough surface and can be scattered among the zooids or form a reproductive band within the colony (description from Dick et al. 2005).

In California, S. japonica is bright orange in color, whereas the similar S. errata tends to be paler. The latter can have adventitious, large, frontal avicularia, though they may be rare. Schizoporella errata is rare on experimental fouling panels, but quite abundant in San Francisco Bay as bryoliths (unattached, living colony masses), whereas S. japonica is very abundant on panels, but has never been seen to form bryoliths (Linda McCann, personal communication 2009).

Schizoporella pseudoerrata
This very similar species was newly described is known from California fouling communities, but is not likely to be a native species and may be a redescription of a form of a previously described Schizoporella (James T. Carlton, personal communication, 2013). and is presumed to be native. See Soule et al. 2007) for a description.

Schizoporella sp.
One morphotype found in San Diego may be the species described by the Soules from Baja, Cal (Soule and Soule 1964), as S. occidentalae, but more specimens are necessary to confirm the identification (Linda McCann personal communication, 2013)

Schizoporella unicornis
Dick et al. (2005) have re-examined Schizoporella sp. from Ketchikan, Alaska, and both sides of the Pacific, and have raised Ortmann's S. unicornis var. japonica' to the status of a distinct species, noting differences between this form and British S. unicornis, and similarities between the Japanese type specimen and Alaskan Schizoporella, as well as specimens collected from Smithsonian Environmental Research Center fouling plates from Puget Sound to San Francisco.

Life History- Schizoporella japonica is an encrusting, calcified bryozoan composed of many individual zooids. The zooids feed by extending the ciliated tentacles of the lophophore as a funnel, creating a current, and driving food particles into their mouths. The food is guided along the tentacles and through the pharynx by the cilia. Larger food particles can be moved or captured by flicking or contracting the tentacles (Barnes 1983). Larvae of the congeneric S. errata are lecithotrophic, and have a short planktonic period (less than 1 day, Hayward and Ryland 1998). This is likely for S. japonica also. Larvae settle on a substrate and metamorphose into the first zooid of a colony, an ancestrula (Barnes 1983).

Schizoporella spp. are common fouling organisms on ships' hulls, docks, and other hard surfaces (Woods Hole Oceanographic Institution 1952). Ryland (1971) suggests that the calcareous layers produced by the bryozoans may actually protect pilings and docks from borers. Powell (1970) considered that S. japonica (as S. unicornis) had little effect on live oysters, because the bryozoans settled primarily on dead shells and rocks, but were rarely seen on the living animals.

Powell, N.A. (1970) Schizoporella unicornis - an alien bryozoan introduced into the Strait of Georgia., Journal of the Fisheries Research Board of Canada 27: 1847-1853