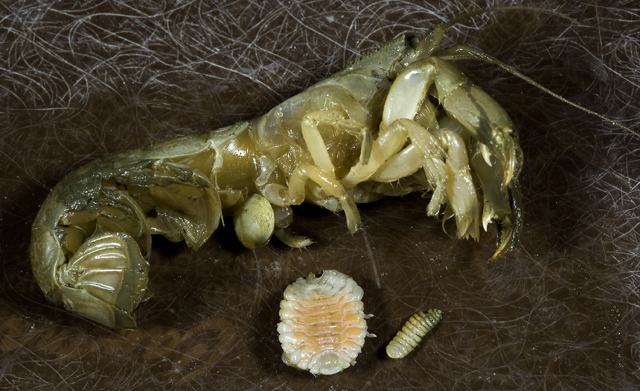 Orthione griffenis is an ectoparasitic isopod which inhabits the gill chambers of mud shrimps. It is thought to be native to Asia, from Russia to South Korea. Introduced populations are known from the West coast of North America, from British Columbia to Mexico. One of its primary hosts in its non-native range is Upogebia pugettensis, a widely used and commercially harvested, fish bait species. Infection by the parasite leads to weight loss and decreased reproduction, causing sharp declines in mud shrimp populations.

Orthione griffenis was first described from specimens collected from Upogebia pugettensis (Blue Mud Shrimp), from Yaquina Bay, Oregon, in 1999-2000 (Markham 2004). Adults of this isopod inhabit the gill chamber of the mud shrimp, while feeding on its blood, thereby reducing the shrimp's reproductive potential (Floyd and Chapman 2005; Dumbauld et al. 2011; Chapman et al. 2012). Based on its recent discovery, especially on an animal which is widely studied and used for bait (U. pugettensis), O. griffenis is suspected to be introduced to Northeast Pacific waters (Floyd and Chapman 2005). Prior to its description, O. griffenis was recognized from waters of the Yellow Sea, China, from specimens of the mud shrimp Austinogebia wushienweni collected from 1951 to 1959, from A. narutensis and U. issaeffi in the Seto Inland Sea in Japan (Williams and An 2009), and from U. major in the Yellow Sea, Korea (Hong et al. 2015). In the Northeast Pacific, it has been found on U. pugettensis from Vancouver, British Columbia to Morro Bay, California (Williams and An 2009; Chapman et al. 2012), and on U. macginitieorum in Carpinteria, California and Todos los Santos Bay, Baja California, Mexico. This parasite has been associated with the decline and extinction of many West Coast populations of U. pugettensis (Chapman et al. 2012).

Hong et al. (2015), compared mitochondrial CIO genes from Korean and Oregon specimens and argues that the Eastern and Western populations are conspecific, but represent disjunct populations of an amphi-Pacific species. This hypothesis seems improbable based on the history given above, but a larger survey would provide greater understanding of biogeographical range and origin of this species.

The earliest reported specimens of O. griffenis on the West Coast were collected in 1988 in Willapa Bay, Washington (WA) (Dumbauld et al. 2011; Chapman et al. 2012), and subsequently in Morro Bay, California (CA) in 1992. Specimens were photographed in 1995 and 1997 on U. pugettensis from Eld Island, WA and Coos Bay, Oregon (OR) respectively (Chapman et al. 2012), before the collection of the formally described specimens from Yaquina Bay, OR in 1999 (Markham 2004). Between 2000 and 2008, it was collected on U. pugettensis from Vancouver Harbor and Vancouver Island, British Columbia (Lamb and Hanby 2005, cited by Williams and An 2009; Chapman et al. 2012); Grays Harbor, WA; Willapa Bay, WA; Tillamook Bay, OR; Netarts Bay, OR; Alsea Bay, OR; Yaquina Bay, OR; Coos Bay, OR; Humboldt Bay, CA; and Bodega Harbor, CA (Chapman et al. 2012). Further south, O. griffenis was found on U. macginitieorum in Carpinteria, CA in 2003, and Todos los Santos Bay, Baja California, Mexico in 2008. In the bays where this parasite was found, populations of U. pugettensis have declined sharply or disappeared (Chapman et al. 2012). Effects on populations of U. macginitieorum are less clear. The parasite has not been reported from two other Southern California-Mexico species, U. lepta and U. onchyon (Chapman et al. 2012). The likely initial vector for the introduction was ballast water containing the planktonic epicaridium, microniscus or cryptoniscus larvae of the isopods. Upogebia pugettensis is widely harvested and sold as bait, which is likley means of transport between estuaries.

Orthione griffenis is a bopyrid isopod. Members of the family Bopyridae are highly modified isopods, whose adults are sessile parasites on decapod crustaceans. Males and females are dramatically different, but both are segmented, and have recognizable pereiopods. Females are large and asymmetrical, while males are small and symmetrical. In both sexes, the cephalon (head), peraeon (thorax), and pleon (abodomen) are distinct (Schultz 1969; Markham 1985). Eyes are absent in adult females, and are small in juvenile females and males (Markham 2004; Williams and An 2009).

Females of O. griffenis have a broadly oval body, with moderate asymmetry. In dorsal view, the body is somewhat pulled out in the right-posterior direction. The head is squarish-ovate, and continuous with the peraeon. Frontal laminae extend across the anterior of the head. The first antenna consists of five segments extended beyond the margin of the head. The 2nd antenna is greatly reduced, and comprised of three segments. The barbula [in Bopyridae, the posterio-ventral border of the head, often with one or more beardlike projections (Markham 1988)] has a single claw-shaped process on each side of the head. The maxilliped is roughly triangular and lacks a palp, and its plectron (anteromedial spur) is blunt.

The peraeon is widest across peraeonites 4-5. Peraeonite 1 is shortest and strongly curved around the head, and Peraeonite 2 is strongly concave anteriorly, while Peraeonites 5-7 are strongly concave posteriorly. Pereonites 1-6 are bordered by coxal plates. Peraeonites 2-5 have a central, dorsal depression. On the ventral side of the body, 5 pairs of oostegites cover the brood pouch, the first pair being nearly circular and the subsequent pairs long and slender. The pereiopods are relatively short and blunt, but have all their joints distinct, and are double in size posteriorly. The bases of the pereiopods are developed into carinae (keels) and the dactyls (segment 7) are short comma-shaped claws, fitting into receptacles on the propodi (segment 6). The pleon (abdomen) consists of 6 pleonites, all concave posteriorly. On the ventral side, the borders of the pleonites are covered by slender uniramous lateral plates and biramous pleopods, all of similar size. Females are 6- 24 mm long and lack pigment.

Males of O. griffenis have a symmetrical body, with a semicircular head, a pleon of 7 segments, straight parallel sides, and a rounded pleon of 6 segments. Males from North America lacked eyes (Markham 2004), but males from China had small, dark eyes (Williams and An 2009). There is a short pair of Antennae 1, and a longer pair of Antennae 2, extending beyond the margins of the head. The pereiopods are short, clustered medially, with their dactyls are folded against the propodi. The pleonites become progressively narrower, with pleonites 1-5 becoming more convex on the posterior side, and pleonite 6, being small and rounded, and set into the concave space, with a pair of projecting uropods. Males are 4.5-11 mm long. The above description is based on: Markham 2004 and Williams and An 2009.

Williams and An (2009) illustrate an epicaridium larva of O. griffenis, the stage which hatches from the eggs in the brood pouch. This larva attaches to a copepod, and metamorphoses into a microniscus larva, which molts several times and transforms into a cryptonicus larva, that infects an upogebiid mud shrimp (Schultz 1969; Williiams and An 2009). The cryptoniscus and microniscus stages of O. griffenis have not been described.

Orthione griffenis, like other bopyrid isopods, is an ectoparasite on decapod crustaceans as an adult, but uses copepods as a host in the larval stages of its life cycle (Markham 2004; Williams and An 2009). The parasitic female releases a planktonic epicaridium larva, which attaches to a copepod and develops into a microniscus larva as it grows through several molts, and then detaches as a cryptonicscus larva and attaches to a thalassiniid mud shrimp (Upogebia, Austinogebia sp.). The larva burrows beneath the carapace of its host, loses its appendages, and becomes a bopyridium. If the shrimp has no previous infestation, the isopod matures as a female; if another O. griffenis is present, the isopod becomes a dwarf male (Repetto and Griffen 2012). In Oregon populations, Repetto et al. (2013) found that infected animals had no more than one male-female pair per animal. Females brood and release large numbers of larvae (Williams and An 2009).

The hosts of O. griffenis are mud shrimps of the family Upogebiidae, decapod crustaceans, which reach about 100-150 mm in size and burrow in intertidal mudflats. The adult inhabits the gill chamber of the mud shrimp and feeds on its hemolymph. This parasite does not increase the host's mortality, or feminize males, but the energetic burden greatly reduces reproductive output, effectively castrating the shrimps (Griffen 2009; Smith and Chapman 2009).

Adults of Orthione griffenis inhabit the gill chamber of mud shrimps from the family Upogebiidae. It has been found in Austinogebia wushienweni, A. narutensis and Upogebia issaeffi in its native Northwest Pacific range, and in U. pugettensis and U. macginitieorum in the Northeast Pacific (Williams and An 2009; Chapman et al. 2012). Prevalence in one native population, in U. issaeffi, in Vostok Bay, Russia was 4%, but infected females still produced egg clutches (Selin 2014). Impacts on the naive, invaded host, U. pugettensis, appear to be much greater, resulting in the local extinction of mud shrimp populations, and associated ecological and economic impacts, due to the loss of a popular bait animal and an important ecosystem engineer (Dumbauld et al. 2011; Chapman et al. 2012).

Fisheries- Upogebia pugettensis is widely used, and commercially harvested, as fish bait in the Northeast Pacific. The total commercial harvest for Oregon coastal bays declined sharply after 1992. In Alsea Bay, in 2009-2011, 120 kg were commercially harvested, compared to 480 kg in 1991-1996 (Chapman and Carter 2014). On the other hand, this mud shrimp is regarded as a pest in oyster beds and is controlled with the pesticide Carbaryl, so that its decline might have benefits for oyster fisheries (Smith et al. 2009). Chapman et al. (2012) have noted that the decline of U. pugettensis has permitted the expansion of oyster areas, such as in Samish Bay, OR, where dense shrimp populations interfered with culture operations.

Parasitism- Juveniles and adults of O. griffenis attach to the interior of the gill chamber of U. pugettensis and sucks the host's blood. Infection results in weight loss, which is positively correlated with weight of the parasite(s) (Smith et al. 2008). Infected ovigerous females are rarely seen, and carry very small broods (e.g., 15 eggs for an infected female vs 1800 for a typical uninfected female; Smith et al. 2008). Impacts of parasitism were greater on female shrimps than on males. Infected females had a reduced Gonado-HepatoSomatic Index (GSHI), consistent with a diversion of metabolic energy from the shrimp's reproduction to the parasite. Male shrimp were infected less frequently than females, had smaller parasites, and their GSHI was not affected by infection. There was no evidence for feminization of males by the parasite (Repetto and Griffen 2011).

Markham, John C. (1985) A review of the bopyrid isopods infesting caridiean shrimps in the northwestern Atlantic Ocean, with special reference to those collected in the Hourglass cruises in the Gulf of Mexico, Memoirs of the Hourglass Cruises 7(3): 1-156

Markham, John C. (1988) Descriptions and revisions of some species of Isopoda Bopyridae of the North Western Atlantic Ocean, Zoologische Verhandelingen 246: 1-63