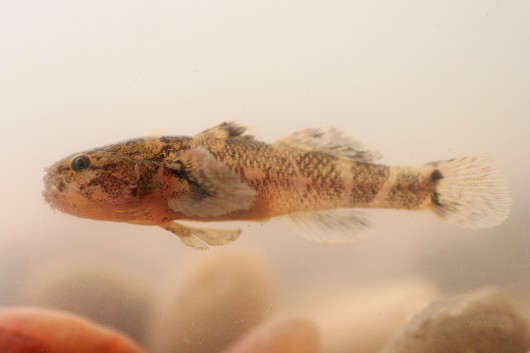 Tridentiger barbatus (Shokihaze Goby; Bearded Goby) is a coastal marine and estuarine fish that have a distinctive beard-like a fringe of short barbels on its head. It is native to japan where it is classified as a near-threatened species. It is introduced in California it is widespread and common in the San Francisco Bay system ranging from the lower Sacramento and San Joaquin Rivers to San Pablo Bay in waters between 0.2-28.8 PSU salinity. No impacts have been reported for this goby in California.

Tridentiger barbatus (Shokihaze Goby) is native to the marine and brackish waters of the northwest Pacific, including the coasts of Japan, Korea. China, Taiwan, and Vietnam (Greiner 2002; Froese and Pauly 2014). This goby is considered a near-threatened species in Japan where it occurs mainly in upper estuaries.

Tridentiger barbatus (Shokihaze Goby) was first caught in North America in Denverton Slough,off Suisun Bay in the inner San Francisco Bay estuary in 1994 (Greiner 2002; USGS Nonindigenous Aquatic Species Program 2014). It rapidly became widespread and common in the San Francisco Bay system ranging from the lower Sacramento and San Joaquin Rivers to San Pablo Bay, and 0.2-28.8 PSU salinity (Greiner 2002). In Montezuma Slough, Suisun Marsh (1-7 PSU, 10-22 C) in 2013-2015, T. barbatus was ~2% of the catch in minnow traps, compared to 10% for T. bifasciatus (Young et al. 2017). “One shokihaze goby was found on 22 August 2001 at the John E. Skinner Delta Fish Protective Facility” (J. Morinaka, CDFG, personal communication). This facility is located at the northern end of the California Aqueduct, near Tracy California (Greiner 2002). We have not found reports of this fish in southern California reservoirs.

Tridentiger barbatus (Shokihaze Goby; Bearded Goby) is a coastal marine and estuarine fish. It has the typical features of the family Gobiidae, including the two pelvic fins united to form a conical sucking disk, an (anterior) spiny and (posterior) soft dorsal fin, and eyes near the top of the head. The dorsal fins have seven spines and ten rays, respectively, which are separated by a gap. The anal fin has ten rays. This goby is relatively fat, with a wide flat head. There is a fringe of short barbels on the ventral margin of behind the eye, on the lower jaw, and on the preoperculum, resembling a short beard. The lateral line is not noticeable. Colors are highly variable, with six diffuse dark-brown bands over a light-brown background. The dark bands fade ventrally. There are usually two black spots at the upper and lowers bases of the caudal fin. This fish reaches a maximum length of 112 mm (Greiner 2002; Froese and Pauly 2018).

Tridentiger barbatus (Shokihaze Goby) is a coastal marine and estuarine fish. In Ariake Sound, Japan spawning takes place in May through September. Male fish select large empty hinged oyster shells (Crassostrea ariakensis) as nests for the females to lay their eggs. The males then clean and guard the eggs and nest. Females can lay between 2,610 to 23,365 eggs. The eggs are ellipsoid and attached to the shells. Eggs take about 4 days to hatch at 25 C. The planktonic larvae are about 3 mm long at hatching and settle at ~15-17 mm. The fish mature after one year, and some may survive to their third year (Dotu 1957).

Tridentiger barbatus ranges from cold-temperate to tropical climates in brackish and marine coastal waters. They have been collected at temperatures of from 7 to 28 C (Greiner 2002; Yagi et al. 2011; Inui et al. 2014; Froese and Pauly 2018). In the Ariake Sea, Japan juvenile fish are largely restricted to the upper regions of estuaries (Yagi et al. 2011). In the San Francisco estuary, T. barbatus has ranged well into tidal fresh water in the Delta (Greiner 2002). The salinity requirements for spawning are unknown, but we have not found reports of spawning populations in nontidal freshwater. Reported foods of this fish are annelids, crustaceans, and small fishes (Dotu 1957).

No impacts have been reported for Tridentiger barbatus (Shokihaze Goby) in California. The major concern would be a potential spread to southern California reservoirs, and estuaries inhabited by the endangered Tidewater Goby (Greiner 2002). However, unlike the T. bifasciatus, the Shokihaze Goby is not known to reproduce in nontidal freshwater, so dispersal through the aqueduct and reservoir system is less likely.