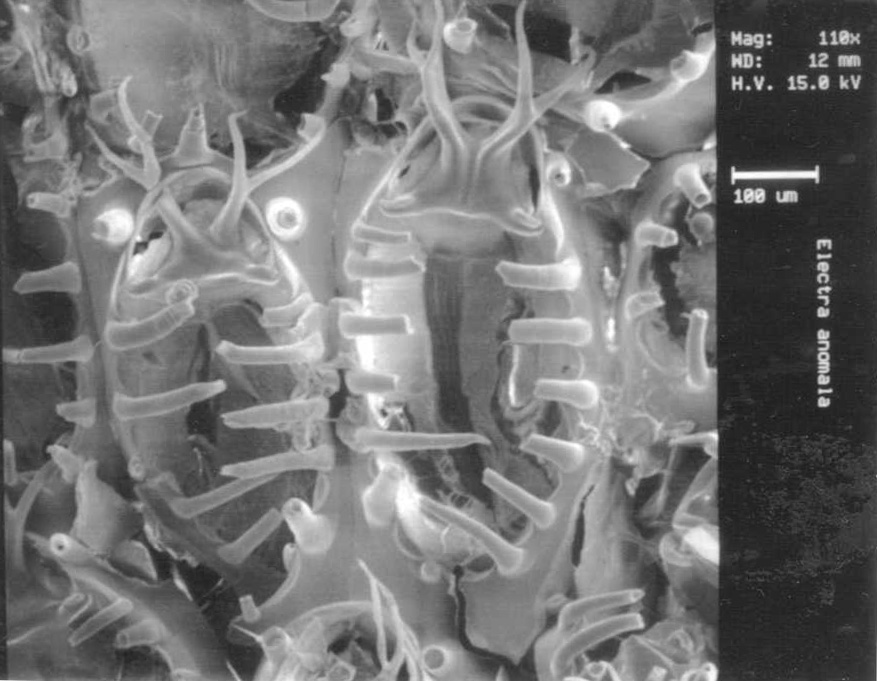 Arbopercula bengalensis was first described from West Bengal, India and is native throughout India and perhaps to the warm-temperate and tropical coast of China. It has been introduced to Florida, Puerto Rico, Panama, Australia, and West Africa. It is known from mangroves, rocky areas, pilings, and buoys and is characteristic of brackish water, but also occurs at marine salinities. Throughout its native and introduced range, A. bengalensis is a fast-growing fouling species, but its economic and ecological impacts have not been studied.

Arbopercula bengalensis was first described from West Bengal, India (Stoliczka 1896, cited by Rao and Ganapati 1978) and is native throughout India and perhaps the warm-temperate and tropical coast of China. The status of this species in China is currently unknown and it may have been introduced there. Its type locality was 'only 1/5 as saline as sea-water’ (Stoliczka 1869, cited by Rao and Ganapati 1978), and it is considered a characteristically brackish-water species (Winston 1977; Rao and Ganapati 1978). However, it is also abundant at sites with salinities above 30 PSU (Menon and Nair 1972). In India, it occurs along the shores of the Arabian Sea from Mumbai (Pillai and Madhaven 1981; Udhayakumar and Karande 1989) to Cochin (Menon and Nair 1972), and on the shores of the Bay of Bengal at Visakhapatnam (Rao and Ganapati 1978) and Port Canning (Calcutta area, Stoliczka 1869, cited by Rao and Ganapati 1978 ). On the coast of China, it has been found from Hainan Island (Huang et al. 2001) to Xiamen on the Taiwan Straits (Liu et al. 2001). Outside the southern coasts of Asia, A. bengalensis has been introduced to Australia, West Africa, Panama, and Florida (Osburn 1950; Powell 1971; Cook 1968; Saenger et al. 1979; Hall 1984; McCann et al. 2007). Arbopercula bengalensis has planktotrophic cyphonautes larvae (Udhayakumar and Karande 1989), which may have sufficient duration for ballast water transport.

Arbopercula bengalensis was collected near Balboa, on the Pacific side of the Panama Canal by Osburn before 1950 (Osburn 1950; Osburn 1953), and by Powell (1971). It was not collected by the 'St. George' expedition of 1924 (Powell 1971). Powell described it as 'one of the two dominant fouling bryozoans in Balboa Harbor and Panama Bay, the colonies forming large bushy lumps on the navigation buoys' (Powell 1971). He found it only on the Pacific side of the canal. During SERC fouling plate collections in 2004, Ruiz et al. (unpublished data), found this species at most stations sampled on the Caribbean side of the canal, as well as on the Pacific side. The Panama Canal seems a likely route for the transport of A. bengalensis into the Atlantic.

Arbopercula bengalensis forms encrusting colonies. Its zooids are moderately large, about 0.60 mm long by 0.25-0.30 mm wide, and elongate-rectangular in shape, with an elongate ovoid membranous area that covers most of the frontal surface and is edged by smooth gymnocrystal calcification (calcification deposited on the outside of the body wall). From the lateral and proximal margins of zooids, 11-14 slender, flattened spines arch over the frontal membrane. A distinct proximal spine, sometimes forked, may be present. A pair of distal spines occurs on either side of the operculum. They may bifurcate at the tips, and may overlap, but do not fuse. The most striking feature of the species is the pair of long, branching, chitinous spines which project outward from the outer surface of the D-shaped operculum. The zooids have no avicularia and no specialized ovicells (Description from McCann et al. 2007; Nikulina 2010).

Life History- Arbopercula bengalensis is an encrusting, calcified bryozoan colony composed of many individual zooids. The zooids feed by extending the ciliated tentacles of the lophophore as a funnel, creating a current, and driving food particles into their mouths. The food is guided along the tentacles and through the pharynx by the cilia. Larger food particles can be moved or captured by flicking or contracting the tentacles (Barnes 1983). Larvae of A. bengalensis have a planktotrophic cyphonautes larva, but may have a fairly short planktonic period. Fouling plates placed in the Indian River Lagoon, Florida, in September, had developing colonies after two weeks in the water (McCann et al. 2007). Larvae settle on a substrate and metamorphose into the first zooid of a colony, an ancestrula. (Barnes 1983).

Competition- Arbopercula bengalensis is considered to be a competitive, fast-growing member of the fouling community in Indian waters, owing to its year-round breeding, early maturity, and tolerance of varied salinity and pollution, although it rarely overgrows or displaces colonies of other species (Udhayakumar and Karande 1989; Karande and Udhayakumar 1992). It was considered one of two dominant fouling species in Balboa Harbor and Panama Bay, by 1971 (Powell 1971). In many areas it is the dominant bryozoan, occupying more than 70% of the space covered by bryozoans and most of the available substrate (Udhayakumar and Karande 1989; Ruiz, unpublished data). However, experimental studies of its effects on other fouling species have not been conducted in invaded waters.

Karande, A. A.; Udhayakumar, M. (1992) Consequences of crowding on life-histories of cheilostome bryozoans in Bombay., Indian Journal of Marine Science 21: 133-136

Menon, N. Ravindanathra; Nair, N. Balakrishnan (1972) The growth of four species of intertidal bryozoans in Cochin backwaters, Proceedings of the Indian National Academy of Sciences B 38: 397-402

Rao, K. Satyanaryana; Ganapati, P. N. (1974) On the common anascan genus Electra from Visakhapatnam and its vicinity, Proceedings of the Indian National Academy of Sciences B 38: 220-224