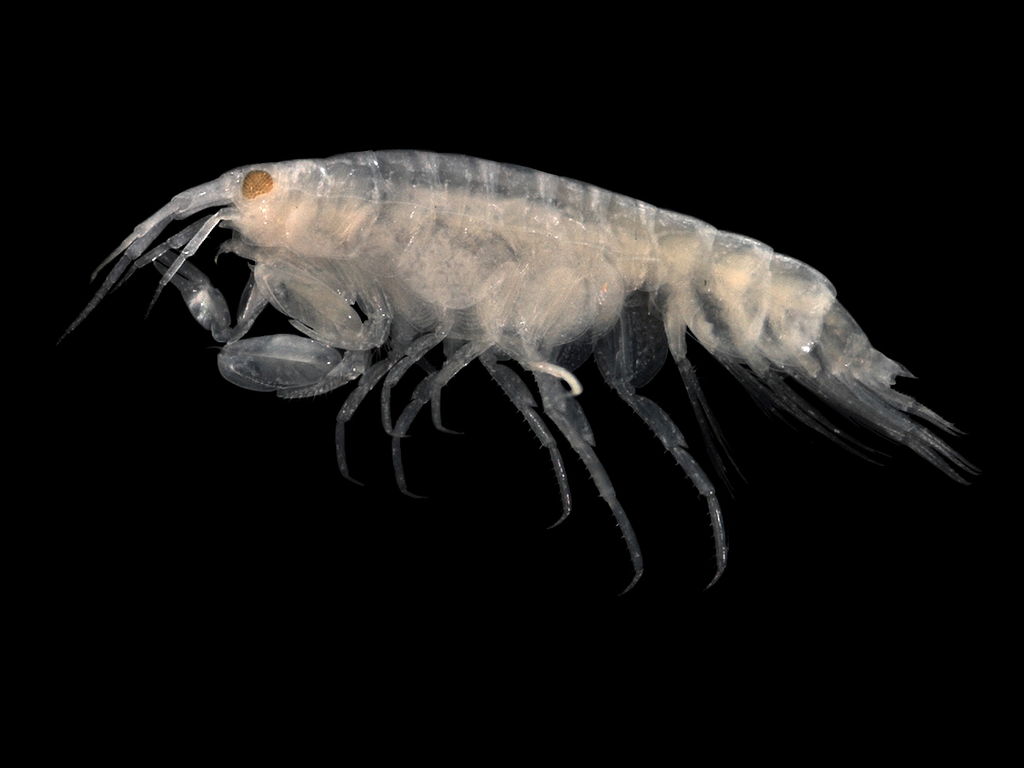 Leucothoe nagatai is a small to medium sized amphipod, which lives commensally inside tunicates and sponges. It was described from Japan and is native to the east and west coasts, south to Korea. It has been introduced to Southern California, ranging from Santa Barbara Harbor to San Diego Bay. It has been found inside native and introduced tunicates and sponges. Its relation to its host is unknown, but could be commensal or parasitic.

Image Credit: Hans Hillewaert and Wikimedia Commons (CC-BY-SA-4.0). Please note that the image is of Leucothoe incisa, not Leucothoe nagatai.

In California, amphipods of the genus Leucothoe are often found inside both native and introduced (eg. Ciona spp., Styela plicata) tunicates (Cohen and Carlton 1995; Don Cadien in SCAMIT 2011). Leucothoe nagatai was described by Ishimaru (1985) from Japan. It can be found on the east and west coasts of Japan and on Ulleungdo Island, off the east coast of Korea (Ishimaru 1985; Kim and Kim 1991). It is introduced throughout California, but its date of introduction is uncertain, since it is easily confused with the cryptogenic (i.e. origin unknown) species L. alata and L. spinicarpa. Cohen and Carlton (1995) referred to Leucothoe alata Barnard 1959, described from Newport Bay, CA as a likely introduction with tunicates. It has been reported from Japan, but identifications there are uncertain and further information is needed to determine its true native range. Since tunicates from the Northwest Pacific are widely introduced, Leucothoe spp. may be more widespread than published records indicate.

The date of Leucothoe nagatai's introduction is uncertain, since it is easily confused with the cryptogenic species L. alata and L. spinicarpa. The earliest record of Leucothoe spp, as far as we are aware, is a collection of L. spinicarpa collected in 1949 off Santa Catalina Island, California (USNM 127572, U.S. National Museum of Natural History 2015). Leucothoe alata was described from Newport Bay, from specimens collected in 1951 (Barnard and Reish 1959). Leucothoe spp. were collected in San Francisco Bay in 1977 and 1993 (Cohen and Carlton 1995), but the amphipods were not identified to species, so their invasion status is uncertain. The first confirmed collection of Leucothoe nagatai on the West Coast was in 1979, in Los Angeles Harbor (Don Cadien, in SCAMIT 2011). In 2011, it was collected by Don Cadien in Newport Bay and by Ron Velarde in San Diego Bay (Don Cadien, in SCAMIT 2011), and in California Fish and Wildlife surveys in Santa Barbara Harbor, Port Hueneme, Avalon Harbor on Santa Catalina Island, Dana Point Harbor, Oceanside Harbor, Mission Bay, and San Diego Bay (California Department of Fish and Wildlife 2014). In California, L. nagatai has been reported from introduced Ciona spp. and Styela plicata, native/introduced Chalinula sp. (sponge), and native Aplidium californicum and Ascidia ceratodes.

Generic traits of species in the genus Leucothoe include a compact body; short antennae with peduncles much larger than the flagella; Antenna 1 being much more robust than Antenna 2; and a greatly enlarged Gnathopod 2 in both sexes (Bousfield 1973; Chapman 2007; White 2011). The rostrum of Leucothoe nagatai is poorly developed, the lateral lobe of the head is broadly rounded, and the eye is oval and medium-sized. Coxa 1 is small and has a rounded anterior corner. Coxae 2-4 are large, ovoid, and wider than tall, while Coxae 5-6 are small and bilobed, and Coxa 7 is smaller and circular. The basal segment of the flagellum of Antenna 1 is much shorter than segment 2, while in L. alata, the basal segment is much longer than segment 2. Antenna 2, though thinner than Antenna 1, is equal or greater in length.

Gnathopod 1 of L. nagatai is shorter and less robust than Gnathopod 2, with the propodus (segment 6) not inflated, and a short dactyl, resembling a small claw, about 10% of the propodus length. Segment 5 of Gnathopod 2 is extended distally to form a curved blade. The propodus (segment 6) is greatly inflated in males, with a palm having 4 large tubercles. The dactyl (segment 7) is large, but does not exceed the length of the palm. In females, the propodus is less inflated and bears setae on the distal end. The 3 pairs of uropods are biramous, decreasing in length from Uropod 1 to Uropod 3. The telson is shield shaped, with a width 1.8 X length. Male specimens were 8-11 mm and females were 7-10 mm. Description based on: Ishimaru 1985, Kim and Kim 1991, Don Cadien, in SCAMIT 2011, and White 2011.

Leucothoe alata
Described as  L. alata from Newport Bay, California (Barnard 1959). Reports of this amphipod from Japan may be due to confusion with L. nagatai (Ishimaru 1985). The range of this species is poorly known and it could be native to Calfornia waters. Don Cadien (in SCAMIT 2011) noted that he could distinguish the L. alata and L. nagatai by coloration, but did not give details.

Leucothoe nagatai is probably a sequential hermaphrodite, being female first and then male (Chapman 2007). The young are brooded and development is direct (Bousfield 1973). Leucothoe sp. often inhabit tunicates in male/female pairs, and drive out or kill intruding individuals (Thiel 1999; Don Cadien in SCAMIT 2011). Juvenile Leucothoe may colonize zooids of colonial tunicates, but move to solitary ascidians as they mature (Thiel 1999).

Leucothoe nagatai is known from temperate climates, and its tunicate and sponge hosts are limited to polyhaline-euhaline waters. In California, L. nagatai has been found inside both native and introduced species. Its hosts include the nonindigenous tunicates Ciona spp., Styela plicata, and the native Aplidium californicum, Ascidia ceratodes, and sponges of the genus Chalinula sp., which include native, introduced, and cryptogenic species (Cohen and Carlton 1995; Don Cadien in SCAMIT 2011). This amphipod feeds by filtering the host's respiratory current, and does not consume sponge or tunicate tissues (Don Cadien in SCAMIT 2011). It could be classified as either a commensal or parasite, since it could deprive the host of some food.

Phytoplankton (filterd by sponges and tunicates)

There are no reported impacts of Leucothoe nagatai.

Ishimaru, Shin-Ichi (1985) A new species of the genus Leucothoe (Amphipoda, Gammaridea, Leucothoidae) from Japan, Proceedings of the Japanese Society of Systematic Zoology 30: 46-52