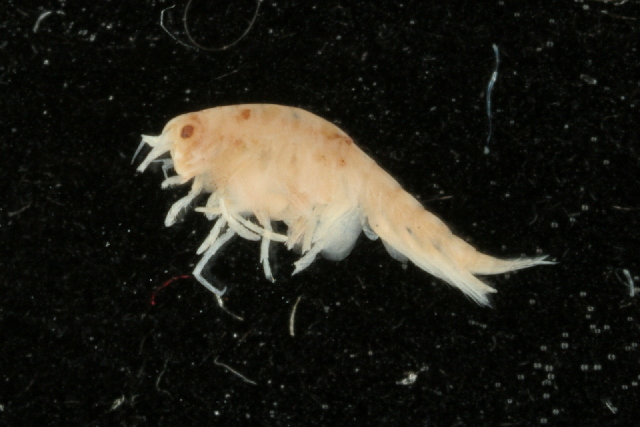 Hourstonius sp. is a small, unidentified estuarine and marine gammarid amphipod. It was reported from marine invertebrate and alga fouling communities in Chesapeake Bay (Virginia and Maryland) in the mid-1990’s and is thought to be established. Historical records show no reports of this species, or any sibling species, in the area prior to the 1970’s. As its full identity is still unknown, so are many of its life history and biogeographical characteristics. We consider its most likely native range to be the West Atlantic south of Cape Hatteras, North Carolina. However, given the global distribution of this genus, other source regions cannot be ruled out until this species is properly identified.

Hourstonius sp. (Bousfield and Hoover 2001), formerly Gitanopsis sp. is a not yet identified to species. It is a free-living epifaunal amphipod, and a new record for Chesapeake Bay and the Northwest Atlantic north of Cape Hatteras, North Carolina. No other members of its family, Amphilochidae, are known from the mid-Atlantic region although Amphilochus manudens and Gitanopsis arctica occur on the Canadian coast north of the Gulf of St. Lawrence (Feeley and Wass 1971; Bousfield 1973; Watling and Maurer 1972). Three similar species are known from the western Atlantic south of Cape Hatteras. Hourstonius lagunae is known from the Gulf of Mexico (McKinney 1978), while H. petulans is known only from single specimen from a marine cave, in Bermuda (Karaman 1980). A third amphilochid, Gitanopsis tortugae, described by Shoemaker (1933), from the Tortugas (Florida) ranges north to the Newport River and Back Sound, North Carolina (Nelson 1979). However, the Chesapeake Bay Hourstonius sp. does not appear to be this species (McCann 1997 personal communication).

In previous surveys, amphipods of the family Amphilochiae were not found in Chesapeake Bay (Feeley and Wass 1971; Wass 1972). The present abundance and distribution of Hourstonius sp. in the Chesapeake Bay, and its distinctness from other gammarids, strongly suggest that this form is a recent arrival (McCann 1997 personal communication). We consider it a probable introduction, most likely from the West Atlantic south of Cape Hatteras. However, given the global distribution of the genus (Karaman 1980), other source regions cannot be ruled out until this species is properly identified.

Hourstonius sp. was first collected from the vicinity of Norfolk, Virginia in Scotts Creek, a branch of the Elizabeth River, in the fall of 1994 and in 1995 was found in other Norfolk locations, and in Baltimore Harbor (Curtis Creek). It was common, during examinations of freshly collected fouling plates form Norfolk and Baltimore harbors, actively swimming among hydroid and bryozoan colonies (Ruiz et al. unpublished data; Fofonoff, personal observations).

Species of the genus Gitanopsis were revised by Hoover and Bousfield (2001) and are now in the genus Hourstonius. The two most similar species to the one reported here are H. petulans and H. laguna. Amphipods of the Amphilochidae family are small, marine gammarids, often associated with sessile marine invertebrates or algae. Features of this family include a smooth, laterally compressed body, with unornamented abdominal segments. The rostrum is distinct and medium in size, the eyes are rounded, and the antennae are short with an accessory flagellum minute or lacking. The enlarged, laterally compressed, cephalothorax, together with a downward flexed abdomen, gives this amphipod an elliptical outline. A more detailed description and identification will require morphological study of the Chesapeake amphipods and others of the Amphilochidae (Linda McCann, personal communication). This description is based on: McKinney 1978; Karaman 1980; and Bousfield and Hoover 2000.

Hourstonius spp. resemble amphipods of the family Stenothoidae, sometimes called 'seed-amphipods', but the coxal plates 2-4 are not vastly enlarged, as in the stenothoids (Chapman 2007). The body lengths of described specimens of H. petulans and H. laguna are 2.0 and 2.4 mm, respectively. Amphipods of this family are often brightly colored (Chapman 2007). Live specimens seen in 1995 had a striking black and light gray pattern (Paul Fofonoff, personal communication).

Nothing is known about the specific life history of this unidentified Hourstonius sp., but in gammarid amphipods, sexes are separate, the young are brooded, and development is direct (Bousfield 1973). This amphipod was found in fouling communities in Norfolk (polyhaline, 18-30 PSU salinity) and Baltimore (mesohaline, 8-30 PSU) harbors. A similar species, Hourstonius laguna was found at shallow depths (0-5 m) and generally associated with algae and higher salinity (McKinney 1978). Hourstonius petulans is known only from a marine cave in Bermuda (Karaman 1980). Feeding habits of this amphipod are unknown, but we assume that it is an omnivore.

The ecological and economic impacts of Hourstonius sp. in its introduced range in Chesapeake Bay are unknown.

Karaman, Gordon S. (1980) Revision of the genus Gitanopsis Sars 1895 with description of new genera Afrogitanopsis and Rostrogitanopsis n. gen. (fam. Amphilochidae) (Contribution to the knowledge of Amphipoda 104)., Poljopreda i Sumarstvo 26(1): 43-69