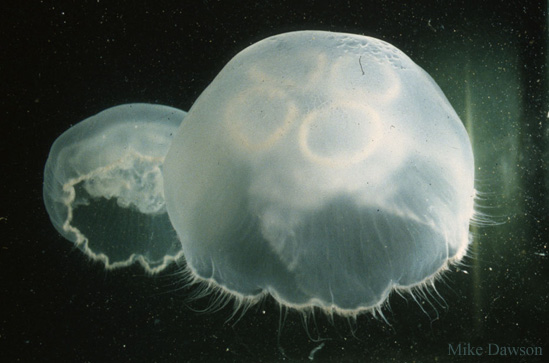 Aurelia species are commonly known as Moon Jellyfish and are characterized as having an opaque white bell with four orange or pink horseshoe shaped gonads. Historically, many authors considered all Moon Jellyfish to be a single species, Aurelia aurita. However, molecular studies now indicate that 'A. aurita' is a complex of at least 13 species. Aurelia coerulea is a genetically and morphologically distinct form, with a Northwest Pacific origin. Molecular studies indicate that this species is most likely native from southern Korea (and possibly China) to northern Japan. Introduced populations have been reported from California, Australia, France, and Wales. Specific impacts of A. coerulea are little known, because of their confusion with native cryptic species. However, local aggregations of this species have affected power plants in South Korea, and pumps flushing a recreational lagoon in Foster City, on San Francisco Bay.

Historically, many authors considered 'Moon Jellyfish' from polar waters to the equator to be a single species, Aurelia aurita L., described from Sweden by Linnaeus in 1758. A number of regional species were described, but they were often treated as subspecies of A. aurita. Molecular studies indicate that the former 'A. aurita' is a complex of at least 13 species. Regional changes in the abundance, distribution, and morphology of Aurelia populations have suggested invasions of some of these cryptic species (Greenberg et al. 1996; Dawson and Martin 2001; Dawson 2003; Ki et al. 2008; Carlton and Eldredge 2009; Häussermann et al. 2009; Scorrano et al. 2016).

Aurelia coerulea von Lendenfeld 1884 (previously known as 'Aurelia sp. 1') is a genetically and morphologically distinct form, which now has a wide distribution in coastal regions near seaports (Schroth et al. 2001; Dawson et al. 2001; Dawson 2003; Scorrano et al. 2016). Genetically identified specimens of 'Aurelia sp. 1' from Japan, Australia, California, and Europe matched the morphological description of A. coerulea, whose type location is Port Jackson, Australia (von Lendenfeld 1884, cited by Scorrano et al. 2016). Molecular and morphological studies indicate that this species is found from southern Korea (and possibly China) to northern Japan (Greenberg et al. 1996; Dawson 2003; Ki et al. 2008; Scorrano et al. 2016). However, its range in the Northwest Pacific may have increased recently- it was not known in Korean waters before 2000 (Ki et al. 2008). Aurelia coerulea is now known from San Francisco Bay and southern California, the east and west coasts of Australia, the Mediterranean and Atlantic Coasts of France, and Wales (Gershwin 2001; Dawson 2003; Ki et al. 2008). Modeling of ocean-currents and life history of A. coerulea, indicates that populations could not survive long-distance natural dispersal across the Pacific Ocean to North America. Occurrences in Australia and Europe are also clearly anthropogenic introductions (Dawson 2005; Ki et al. 2008). On the East and Gulf coasts, limited sampling has found A. aurita in Boston Harbor, Massachusetts and Charlestown Pond, Rhode Island, and Aurelia sp. 9 off Alabama (Ki et al. 2008), but invasions of A. coerulea and other cryptic forms cannot be excluded.

Schroth et al. (2002) identified Aurelia coerulea (previously known as Aurelia sp. 1; as 'UBI' for ubiquitous) from Japan, California, the Atlantic (Roscoff) and Mediterranean (Perpignan) coasts of France, and Australia (Perth). Ki et al. (2008), using GeneBank sequences, found additional occurrences in eastern Australia and Wales. In spite of this very widespread distribution, A. coerulea shows less genetic variation (0.20-.28% rDNA, COI) than more local species (0.66-0.8% in A. aurita; 0.3-5.8% in A. labiata), suggesting that the dispersed populations of A. coerulea have been recently established (Dawson 2003).

Other invasions of cryptic species of Aurelia are known. Aurelia was first reported in Hawaii in 1953, and was introduced (Carlton and Eldredge 2009), but the Hawaiian specimens have been identified as sp.4, otherwise known from Palau and Kakaban (off Borneo, Indonesia) (Dawson 2003). In the Caspian Sea, where no scyphozoan jellyfish were known, a bloom of Aurelia aurita occurred in 1999, but medusae were not seen after that. However, in 2008, a high density of polyps was found and identified using molecular methods, in the eastern middle Caspian, indicating that populations were well-established. The jellyfish were probably transported in ballast water of ships passing through the Volga-Don canal from the Black Sea (Korsun et al. 2012). Polyps and medusae of A. aurita have also been found on the southern coast of Chile (48-49°S). This was the first record of this genus on the Pacific coast of South America (Häussermann et al. 2009). Given the widespread distribution and diversity of the Aurelia complex, and its potential for ballast water and fouling transport, it is likely that other invasions will be discovered.

Moon Jellyfish of the genus Aurelia are generally characterized as having a bell shaped like a low dome, with four orange or pink horseshoe shaped gonads visible in dorsal view, very small and numerous tentacles at the bell margin, and four transparent oral arms. The bell is scalloped into 16 lobes, separated by eight rhopalia (sense organs containing an eye and statocyst). The color of the bell is opaque white to brownish or pinkish. Aurelia jellyfish were frequently regarded as a single worldwide species, A. aurita, described by Linnaeus from Sweden, and occurring worldwide. However, regional varieties were long recognized, and molecular studies have indicated that at least 13 species exist. Aurelia aurita appears to be native to the North Atlantic Ocean and Baltic Sea, while A. labiata is native to the North Pacific. Most of the other 11 species appear to have limited geographic ranges, but one form, now identified as Aurelia coerulea von Lendenfeld 1884, is known from the Northwest Pacific, the coast of California, Australia, and the Mediterranean and Atlantic coasts of France. It was identified as distinct from native species in San Francisco Bay, southern California, Atlantic France, and the Adriatic Sea (Description from: Greenberg et al. 1996; Dawson and Jacobs 2001; Dawson and Martin 2000; Gershwin 2001; Dawson 2003; Schroth et al. 2003; Mills and Larson 2007; Scorrano et al. 2017).

Aurelia coerulea has its margin scalloped into 8 to 16 lobes, and a manubrium (projecting oral region) which averages 17.5% of the bell diameter. Four oral lobes drop below the manubrium- these average 40.% of the bell diameter, and are usually held straight. On the disk, the radial canals are moderately numerous and have frequent branches. Females brood white, ochre or orange planula larvae on the manubrium. Medusae reach 260 mm in diameter. The polyps have 16-22 tentacles of uniform diameter a cross-like hypostome (Description from: Gershwin 2001; Dawson 2003; Mills and Larson, in Carlton 2007; Scorrone et al. 2017).

The North Atlantic native form A. aurita has eight marginal lobes and an inconspicuous manubrium. The radial arms are about 50% of the umbrella diameter. There is a low density of radial canals, with simple dichotomous branches. This medusa occasionally reaches 50 cm, but 20-40 cm is more common. (Description from: Gershwin 2001; Dawson 2003; Mills and Larson, in Carlton 2007)

The polyp and ephyrae (newly budded medusae) forms of Aurelia coerulea are described by Scorrone et al. (2016). Polyps are conical and attached at the base. They are surrounded by a ring of tentacles, which as they grow, divide into a stack of saucer-like segments. These are released into the water, and grow into medusae. Polyps and ephyrae are illustrated and diagrammed in many works, including Barnes (1983), and Mills and Larson, in Carlton (2007). A key, describing and showing ephyrae of A. aurita and A. limbata is in Straelher-Pohl and Jarms (2010). The polyps and ephyrae of A. coerulea are compared to the Mediterranean forms A. solida and A. relicta (Scorrone et al. 2017).

Aurelia labiata
Aurelia labiata, described from 'New California', in 1821, by Chamisso and Eysenhardt. Appears to be a Northeast Pacific endemic form, which can be separated into 'northern' (British Columbia-OR) and 'central' morphs (Monterey-Tomales Bays), which, however, do not show clear morphological divergence (Dawson 2003). A 'southern morph' of A. labiata, described by Gershwin (2001) from southern California, appears to be the introduced form Aurelia sp. 1 , since this genotype was the only form collected in this region (Dawson et al. 2001).

Scyphozoans of the genus Aurelia spp. have a life cycle that includes a planktonic, lecithotrophic planula, which settles to form a polyp. In Aurelia spp., the polyps often settle on overhanging rocks, the underside of floats and boat hulls (Mills and Larson in Carlton 2007; Häussermann et al. 2009). As they grow, polyps can reproduce asexually by budding off new polyps, budding off resting stages (podocysts), or by developing into a scyphistoma, which produce medusae. Buds can develop directly from the body of the polyp, or from a stolon extending from the polyp. Direct budding is favored when food supply is low (Hubot et al. 2016). The scyphistoma segments to form a stack of flat flower-shaped ephyrae, each of which breaks off to grow into a conspicuous medusa. Medusae have separate sexes, releasing either eggs or sperm, which fuse to from the planula (Barnes 1983). Aurelia coerulea has a life-history feature discovered for the first time in Scyphozoa, reversing the usual life cycle sequence, with polyps forming from degenerating medusae. The ecological significance of this feature is unknown (He et al. 2015), as is its occurrence in other species of Aurelia.

The various cryptic species of Aurelia survive at conditions varying from polar to tropical. Temperate populations are seasonal, often occurring in spring, summer, or fall (Johnson and Allen 2005). Specimens in the Foster City Lagoon were collected in June (Greenberg et al. 1996). In the Baltic Sea, A. aurita reproduce at salinities as low as 4 PSU (Remane and Schleiper 1971). The specifc temperature and salinity requirements of Aurelia coerulea are incompletely known, although its typical habitats are lagoons and harbors with variable temperature and salinity. In experiments, polyps from the Adriatic grew well at 14 and 12 C, and at 24 and 37 PSU (Hubot et al. 2017). Polyps in Jiaozhou Bay, China, released ephyrae at 6.4 to 18 C (Feng et al. 2018). Aurelia spp. are suspension feeders, trapping zooplankton in mucus in the subumbrella, or with their fine tentacles, studded with nematocysts, which harpoon and immobilize prey. Unlike many other scyphozoans, their sting is barely perceptible to humans. Prey consist mostly of small copepods, invertebrate larvae, and ciliates (Turk et al. 2008). The prey is transferred to the oral lobes, trapped in mucus, and transported by cliia into the mouth. Feeding of the polyps is less studied, but they also trap zooplankton prey on their tentacles (Barnes 1983).

Fisheries, Aesthetic, Industry- Specific impacts of Aurelia coerulea are little known, because of their confusion with native cryptic species. However, local aggregations of this species have affected power plants in South Korea, and pumps flushing a recreational lagoon in Foster City, on San Francisco Bay (Greenberg et al. 1996; Ki et al. 2008). Aurelia spp., in general, whether native or introduced, are regarded as pests when large aggregations wash up on beaches, creating bad smells and unpleasant footing, and clogging fishnets or power plants. Populations can increase as a result of eutrophication and overfishing, and increased densities of phytoplankton and small zooplankton, as in the Black Sea and coastal Japan. The polyp stages are greatly favored by piers, floats, buoys, etc. built for aquaculture and marinas, since they prefer to settle on undersides of structures. Polyps and medusae are also tolerant of hypoxic conditions (Purcell et al. 2007).

Specific ecological impacts of Aurelia coerulea are not known, because of the confusion with native cryptic species. Competition with native Aurelia spp. is likely, as is competition with other predatory suspension-feeders. Native A. aurita can compete with and exclude the introduced ctenophore Mnemiopsis leidyi in the Baltic (Riisgard et al. 2010), so introduced Aurelia are likely to compete with native ctenophores. High densities of Aurelia spp. can also affect food-webs indirectly. Predation by A. aurita in a Mediterranean embayment resulted in increased microbial densities, as a result of the medusae preying on small copepods and ciliates (Turk et al. 2008).

Bermejo, Ricardo and 8 authors (2021) The arrival of a red invasive seaweed to a nutrient over enriched estuary increases the spatial extent of macroalgal blooms, Marine Environmental Research 158(194944): Published online

Tokioka, Takasi (1972) On a small collection of ascidians from the Pacific coast of Costa Rica, Publications of the Seto Marine Biological Laboratory 19(6): 383-408