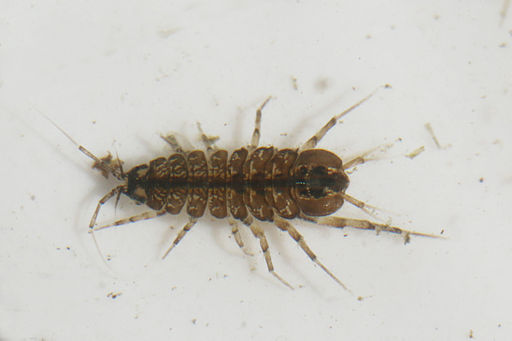 Asellus hilgendorfii is a freshwater isopod, native to eastern Siberia, Japan, and China. It has been introduced to low salinity areas of the San Francisco Bay Estuary, in the Sacramento-San Joaquin Delta, California. This is its only known occurrence in North America. It is considered an indicator of polluted waters and is known from lakes, ponds, rivers, and ditches where it is associated with emergent or riparian vegetation. Possible vectors for introduction include ballast water and trade in ornamental aquatic plants and fish. No impacts have been reported for this species.

Image Credit: Sharp Photography via Wikipedia.org and the CC BY-SA 4.0 license. Please note that the image is of Asellus sp.

Asellus hilgendorfii, described from Japan, is native to freshwaters in eastern Siberia, Japan, and China (Henry and Magniez 1995). It has been reported from Turkey (Camur and Kigiz, 2000), but this record needs confirmation. It was identified from samples collected in the Sacramento-San Joaquin Delta, California during field sampling in 1998-1999, and was also found in survey samples taken as early as 1978 (Toft et al. 2002).

Asellus hilgendorfii was found in preserved invertebrate survey samples from the Sacramento-San Joaquin Delta as early as 1978. In 1998, it was found to be limited to a small portion of the central Delta, at two locations, Upper Mandeville Tip and Venice Cut (Toft et al. 2002). Over a longer span of time, it has been found over a wider range, including Sherman Lake (western Delta) and Old River (southeastern Delta) (Graening and Rogers 2013). Toft et al. (2002) found that A. hilgendorfii, unlike Caecidotea racovitzai and the amphipod Crangonyx floridanus, was not associated with floating plants, but was found mostly near emergent or riparian vegetation. They also suggested that it might be less tolerant of brackish water than C. racovitzai. In North America, Asellus hilgendorfii has not been found outside the San Francisco Bay estuary (Toft et al. 2002; Graening and Rogers 2013). Possible vectors for introduction include ballast water and the trade in ornamental aquatic plants and fishes (Toft et al. 2002).

Asellus hilgendorfii is an isopod of the widespread freshwater genus Asellidae. The body is dorsoventrally flattened, with a length about 4X its width. The 'head' is actually a cephalothorax, representing a fusion of the head and the first thoracic segment. In asellids, Antenna 1 is short, with a segmented peduncle. Antenna 2 has a 5-segmented flagellum and is 2-3X longer than Antenna 1. Both antennae have many-segmented flagella. The eyes are dorsal. There are 6 separated thoracic segments. The first pair of thoracic appendages are a prominent pair of gnathopods. There are 7 pairs of walking legs (pereiopods). The gnathopods and pereiopods, are each about equal or greater than the body width, and extend out laterally; the pereiopods increase in length posteriorly. The coxae are fused with the body, but the other 6 segments of the pereiopods (basis, ischium, merus, carpus, propodus, and dactylus) are distinct. There are 5 pairs of pleopods hidden beneath the abdomen. The pleopods are sexually dimorphic and important for species identification. The 6th pair (uropods) are unmodified and biramous, projecting well behind the body (Pennak 1978; Brusca et al. 2007).

Distinctive morphological features of Asellus hilgendorfii are found in the gnathopods and pleopods. Two tooth-like spines occur in the palm of the propodus of the gnathopod. Asellus hilgendorfii also has a basal spur on the endopod of Pleopod 2, which is absent in Caecidotea. The endopod lacks setae and is somewhat oval. Adults of A. hilgendorfii are 7-15 mm long (Magniez and Toft 2000; Toft et al. 2003). The abdomen is somewhat divided into two ovate lateral lobes, and a central region ending in a blunt angular tip.

The genus Asellus is now considered to be a largely Old-World genus, with one native North American species, Asellus alaskensis, restricted to Alaska (Bowman and Holmquist 1975; Kensley et al. 1996). Asellus hilgendorfii is considered a species complex, widely distributed in Asia, with at least 6 recognizable geographical forms in Japan, China, and Pacific Russia (Henry and Magniez 1995).

Asellus hilgendorfii is a surface-water dwelling freshwater isopod. Sexes are separate, the young are brooded, and development is direct. In cultured animals, the average number of young per brood ranged from 15 to 42 per female, varying both with temperature and age of the female. The young are born at an average length of 1.03 mm and were sexually distinct at 2.5-3.5 mm. Females produced young at ~4 mm length, reached in ~35 days at 25°C and ~70 days at 15°C. The average incubation period for embryos was 9.4 days at 25°C and 18.3 days at 15°C. There was low survival and no growth or reproduction at 5°C (Miyashita and Yasuno 1984).

Asellus hilgendorfii occurs over a wide latitudinal range in Asia, from Siberia to southern China, and all the islands of Japan, including Okinawa (Birstein 1964; Magniez and Toft 2000). We do not have salinity tolerance data for A. hilgendorfii, but the conspecific European species A. aquaticus, which occurs in the mesohaline region of the Baltic Sea, tolerates salinities up to 15 PSU and can reproduce at up to 5 PSU (Gresens 1928, cited by Remane and Schleiper 1971). Asellus hilgendorfii is known from fresh and low salinity regions of the Sacramento-San Joaquin Delta, but avoids more brackish waters (Toft et al. 2002; Graening and Rogers 2013).

Normal habitats of A. hilgendorfii include lakes, ponds, rivers, and ditches, and it is considered an indicator of polluted waters (Miyashita and Yasuno 1984). Toft et al. (2003) found that A. hilgendorfii was not associated with floating plants, but was found mostly near emergent or riparian vegetation. Asellus hilgendorfii, like other Asellus species, is a deposit-feeder on decaying vegetation, fungi, and bacteria. In laboratory culture, it was fed on decaying chestnut leaves (Miyashita and Yasuno 1984). This isopod was found in the guts of four species of freshwater fishes: two native (Sacramento Pike minnow- Ptychocheilus grandis; Tule Perch- Hysterocarpus traskii) and two introduced (Bluegill- Lepomis macrochirus; Largemouth Bass- Micropterus salmoides) in the Sacramento-San Joaquin Delta (Toft et al. 2002).

Asellus hilgendorfii is locally common in freshwater portions of the Sacramento-San Joaquin Delta (California), and is a frequent food item for fishes (Toft et al. 2002). However, impacts on fish populations have not been reported.

Birstein, Ya. A. (1964) <missing title>, Zoological Institute of the Academy of Science of the USSR, Leningrad (St. Petersburg), Russia. Pp. 148