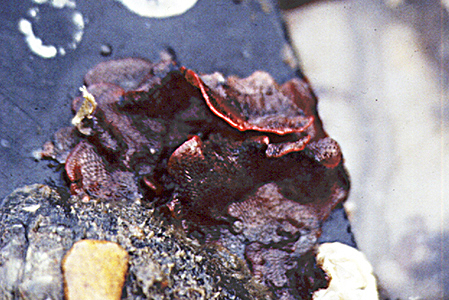 Watersipora arcuata is an encrusting bryozoan that was first described from San Diego Bay, California in 1969. Its native region is unknown, but it may be native to the eastern tropical Pacific. It appears to be introduced in California, the Pacific coast of Mexico, Hawaii, New Zealand, and Australia. It is found on pilings, rocks, floats, and ships' hulls and data suggest that it is a warm-water species which may be restricted in cooler waters, or outcompeted by W. subtorquata. Watersipora arcuata is notable for its ability to settle on surfaces covered with copper-based antifouling paints, and to survive on fast moving ships, its most likely introduction vector.

Watersipora arcuata was first described from San Diego Bay, California, but is apparently introduced in Southern California (Banta 1969). Banta considered that specimens of Watersipora collected in the Galapagos (Hastings 1930, cited by Banta 1969), the Gulf of California (Osburn 1952, Soule 1961, cited by Banta 1969), and Scammon's Lagoon (Soule and Soule 1964), on the Pacific side of Baja California also belonged to this species. The native region of W. arcuata is not clear, although Banta concluded that it was native to the eastern tropical Pacific. It appears to be introduced in Hawaii (in 1998, Carlton and Eldredge, 2009); New Zealand (in 1957, Gordon 1989; Gordon 1992), and Australia (in the 1940s, Allen and Wood 1950, cited by Keough and Ross 1999). Invasion history of this species is complicated by its taxonomic history- several species of Watersipora were lumped under the name W. cucullata (Banta 1969; Gordon 1967; Gordon 1992; Mackie et al. 2006). Ship fouling appears to be the primary mode of introduction, since its larval duration is very brief (Mackie et al. 2006). Observations in California and New Zealand suggest that W. arcuata may be a warm-water species which may be restricted in cooler waters, or else outcompeted by W. subtorquata and Watersipora sp. A (Gordon and Mawatari 1993; Geller et al. 2008).

Watersipora arcuata was collected in the Gulf of California before 1930, and in Pacific Mexico by the early 1960s (Banta 1969). It was first collected in US waters at the Southwestern Yacht Club Marina, in San Diego Harbor, its type locality (Banta 1969). In the same year, it was found in Oceanside Harbor, Alamitos Bay (Long Beach Marina), Redondo Harbor, and Marina del Rey (Banta 1969). In later sampling, it was found in additional southern California harbors, including Mission Bay (in 2003, de Rivera et al. 2005), Dana Point Harbor, Newport Bay, Huntington Harbor (in 2001, Fairey et al. 2002), Channel Islands Harbor, Port Hueneme (in 2000, Cohen et al. 2002), Ventura West Harbor (in 2003, de Rivera et al. 2005), and Santa Barbara Harbor (Geller et al. 2008). So far, it has not been reported north of Point Conception.

Watersipora arcuata was collected in New South Wales, Australia in the 1940s (Keough and Ross 1999) and is known from several sites near Sydney: Port Kemble (Moran and Grant 1993, cited by Keough and Ross 1999); Port Hacking (Vail and Wass 1981); Manly and The Spit (in 2001, Mackie et al. 2006). It was first collected in Port Phillip Bay, Victoria in 1973 (Holmes 1982, cited by Keough and Ross 1999), and subsequently found in South Australia, near Adelaide, and Western Australia, near Perth (2001, Mackie et al. 2006). In New Zealand, W. arcuata was first found in Auckland, in Waitemata Harbor in 1957 (Gordon 1967; Gordon and Mawatari 1992), and subsequently found in several other harbors on the North Island and at Nelson on the South Island (Gordon 1967). However, W. arcuata has been replaced by W. subtorquata at many locations. In 2013-2014, established populations of W. arcuata were found in a marina in Santa Margherita Ligure, in northwest Italy, the first record in European waters (Ferrario et al. 2015).

Watersipora arcuata is an encrusting bryozoan, but its colonies can become erect and leaf-like, with extensively overlapping calcareous crusts, often with curled edges. This bryozoan forms black crusts with red or orange growing edges. The zooids are roughly elongate or rectangular, and 680-1,110 µm X 290-600 µm in size. The frontal shield is perforated by pseudopores. The orifice is slightly wider than long, and the proximal edge is broad and slightly convex or straight. There are no oral spines, avicularia, or ovicells (description from Gordon and Mawatari 1992).

Watersipora n. sp.
This newly identified, undescribed species is morphologically nearly identical to W. subtorquata but distinct at the molecular level (Mackie 2006; Geller et al. 2008; Mackie et al. 2012). So far, it is known only from California and South Korea.

Life History- Watersipora arcuata is an encrusting, calcified bryozoan composed of many individual zooids. The zooids feed by extending the ciliated tentacles of the lophophore as a funnel, creating a current, and driving food particles into their mouths. The food is guided along the tentacles and through the pharynx by the cilia. Larger food particles can be moved or captured by flicking or contracting the tentacles. (Barnes 1983). Larvae of W. arcuata are lecithotrophic and have a short planktonic period (less than 1 day, Mackie et al. 2006). Larvae settle on a substrate and metamorphose into the first zooid of a colony, an ancestrula (Barnes 1983).

Shipping- Watersipora arcuata is notable for its ability to settle on surfaces covered with copper-based antifouling paints, and to survive on fast moving ships (Allen 1953; Banta 1969). It has the potential to reduce the speed of ships and may provide settling surfaces for other organisms.

Competition- Watersipora arcuata 'became one of the dominant intertidal organisms at several locations' in Auckland Harbor, and spread to other harbors, but in the 1980s was largely repressed by W. subtorquata (Gordon and Mawatari 1992).

Marshall, J. I.; Rowe, F. W. E.; Fisher; Smith, D. F. (1980) Alterations to the relative species-abundance of ascidians and barnacles in a fouling community due to screens, Australian Journal of Marine and Freshwater Research 31: <missing location>

Vail, Lyle L.; Wass, Robin E. (1981) Experimental studies on the settlement and growth of Bryozoa in the natural environment., Australian Journal of Marine and Freshwater Research 32: 639-656