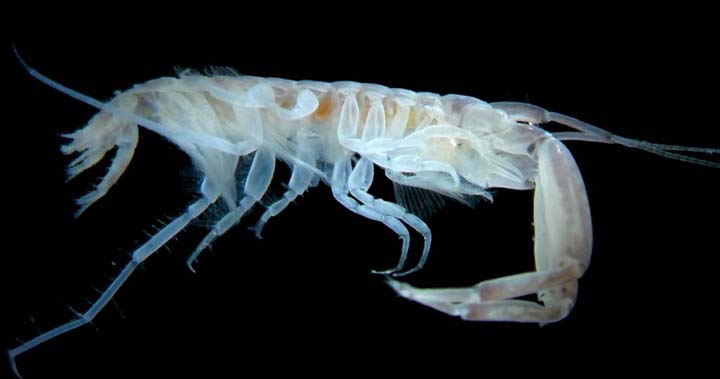 Corophium heteroceratum is an estuarine infaunal amphipod which burrows into muddy sediments. It was described from the Bohai Sea, China and is believed to be native to this region. Non-native specimens are known from California in San Francisco Bay, Tomales Bay, and Los Angeles-Long Beach Harbors. This species may have been transported through ballast water on commercial vessels, as it occasionally swims in the water column.

Image Credit: George Brooks and the California Academy of Sciences

The estuarine amphipod Corophium heteroceratum was described from the Tanggu region, on the Bohai Sea, China (Chapman 1988; Huang 2001). It also occurs in the Yellow Sea (Wang et al. 2008). It was first collected in San Francisco Bay, California between 1985 and 1989. It occurs as far upstream as brackish Grizzly Bay, but is most abundant in subtidal muddy and silty sediments in saltier parts of the central, south, and San Pablo Bays (Cohen and Carlton 1995; Lee et al. 2003; Chapman 2007). It was also collected in Los Angeles-Long Beach Harbor, as early as 1990 (Cohen and Carlton 1995; Ranasinghe et al. 2005).

Corophium heteroceratum was first recognized in San Francisco Bay by 1989, and was probably collected as early as 1986 (John Chapman, personal communication, cited by Cohen and Carlton 1995). In the San Francisco estuary, it occurs in lower intertidal to subtidal muddy and silty sediments, as far up the estuary as Suisun and Grizzly Bays (mean salinity 5.9 PSU). It is more abundant in the more saline parts of San Pablo Bay, and the central and South Bays, at a mean salinity of 27.5 PSU (Cohen and Carlton 1995; Lee et al. 2003; Peterson and Vayssieres 2010). It was also collected in Tomales Bay (Fairey et al. 2002) and in Los-Angeles-Long Beach Harbors (1st record 1990, Cohen and Carlton 1995; Ranasinghe et al. 2005). Ballast water is the most likely vector for transport, since infaunal corophiid amphipods burrow in soft mud, but occasionally swim in the water column (Chapman 1988; Cohen and Carlton 1995).

Corophium heteroceratum has a slender, very depressed body, and a massive Antenna 2, which is longer than Antenna 1. The coxal plates are small and separated. The urosome segments are not fused. Pereionites 2-7 bear sharp downward projections. Both sexes have a pointed rostrum, extending beyond the eye-lobes. The eye is well-developed, but partially obscured by pigmented cuticle.

In C. heteroceratum, the first 3 segments of Antenna 1 lack conspicuous setae (photo, California Academy of Sciences 2002). In males, the first segment has one (sometimes two) medial teeth on the inner surface. Antenna 2 is proportionately larger in males than females, extending well beyond antenna 1. In males, segment 2 bears a large tooth-like excretory spout, while segment 4 has a median denticle and a variably pointed distal tooth. In females, Antenna 2 is about equal to Antenna 1. The distal end of segment 4 in females lacks a distal tooth, but has a medial spine.

The gnathopods are not especially prominent in this genus. Pereiopod 2 is longer than Pereiopod 21 and its dactyl lacks teeth. Pereiopod 7 is nearly twice as long as Pereiopod 6, and has a long curved, smooth, dactyl. The segments of the urosome are separate. Uropod 1 is the longest and 3 is the smallest. Individuals can reach a length of 9 mm (Chapman 2007). The centers of the pleonites are mottled brown and white, but the borders, and the appendages are white (photo, in California Academy of Sciences 2002). Description based on Chapman 2007.

Corophium heteroceratum is a tube-building gammarid amphipod found in muddy substrates of estuaries and coastal waters (Chapman 1988; Cohen and Carlton 1995; Graening et al. 2012). Gammarid amphipods have separate sexes, brooded embryos, and direct development (Bousfield 1973). We have no specific information on the life history of C. heteroceratum. Nocturnal migration is common in the genus (Chapman 1988).

Corophium heteroceratum is native to the coast of northern China, with a wide temperature range (Ren and Liu 2014). It does not range as far into brackish water as C. alienense, but does penetrate into lower Suisun Bay. It is more abundant at salinities above 15 PSU, in the basins of San Francisco Bay proper (Cohen and Carlton 1995; Lee et al. 2003; Peterson and Vaysierres 2010). Corophium heteroceratum builds U-shaped tubes in shallow subtidal muddy substrates (Lee et al. 2003; Graening et al. 2012). Corophium heteroceratum is probably capable of both suspension-feeding and surface-deposit-feeding. Fishes are the primary predators of benthic amphipods in the San Francisco estuary (Feyrer et al. 2003).

Corophium heteroceratum is an abundant benthic amphipod in the more saline parts of San Francisco Bay (Lee et al. 2003; Peterson and Vayssierres 2010). Its feeding habits are not well known, but many species of Corophium amphipods are capable of both feeding on surface deposits and suspended phytoplankton. It is potentially an important grazer on phytoplankton and as a food for fishes.

Chapman, John W. (1988) Invasions of the Northeast Pacific by Asian and Atlantic Gammaridean amphipod crustaceans, including a new species of Corophium, Journal of Crustacean Biology 8(3): 364-382

Wang, Xiao-Chen and 5 authors (2008) Macrobenthic ecology of the intertidal zones of Chajiandao, Dakouhedao and Wangzidao of Yellow River estuary in Autumn, Chinese Journal of Zoology 21: 77-82