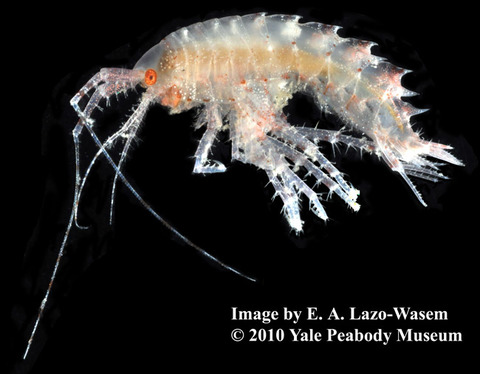 Paradexamine SD1 is an unidentified marine free-living amphipod. The genus is known from Australia, Asia, South America and Africa, but it does not correspond to any known species and is of unknown origin. It has been introduced to California where it ranges from San Francisco Bay to San Diego. It is generally associated with marine fouling communities, often on or among algae and marine invertebrates. Possible vectors for its introduction include hull fouling on recreational boats or commercial ships and ballast water.

Paradexamine SD1 does not correspond to any known species, and is of unknown origin. There are 46 known species of Paradexamine (Appeltans et al. 2015), mostly in Australian waters, but with outliers along the coasts of Asia, South America, and Africa (Barnard and Karaman 1991). In 1991, Paradexamine SD1 was collected on Catalina Island, California (Cadien 2007) and in 1993-1994, it was collected in San Francisco Bay (Cohen and Carlton 1995). It is well-established in saline waters of Central and South San Francisco Bay, outer San Pablo Bay (Foss 2009), and along the coast of southern California (Cohen et al. 2002; Ranasinghe et al. 2005; California Department of Fish and Wildlife 2014).

In 1991, Paradexamine SD1 was collected on Catalina Island, California (CA). Cadien (2007) suggested that it had arrived on the hull of a yacht. In 1993-1994, it was collected in San Francisco Bay, CA (Cohen and Carlton 1995). In 1998-2000, it was found in harbors on the coast of southern California from Channel Islands Harbor and Oxnard to San Diego Bay (Cohen et al. 2002; Cohen et al. 2005; Ranasinghe et al. 2005). Likely vectors include hull fouling of recreational boats or commercial ships and ballast water.

Paradexamine SD1 does not correspond to any known species, and a detailed description is not available, so we will present generic characteristics. The body is laterally compressed and arched with a distinct rostrum. Coxae 1-4 are deeper than their length. Pereiopods 5-7 have segment 2 expanded into shield-like plates. One or more of the posterior pereonites and all of pleonites bear posterior-dorsal median teeth. Pleonites 1-3 bear lateral and dorsal keels. Urosome segments 2 and 3 are fused (Barnard and Karaman 1991; Chapman 2007). The strong pleonal and urosomal armature of this species makes it stand out from other local dexaminoids (Cadien 2007). Adults of Paradexamine SD1 are ~ 5 mm long (Chapman 2007).

Barnard and Karaman (1991) list more than 30 species of Paradexamine worldwide, and Myers and Lecroy (2009) described 9 more species from the Great Barrier Reef. The name of the Australian species, P. churinga has been applied to Paradexamine SD1, but the features of the California form do not quite fit those of any described species (Cadien 2007). The genus is most diverse in the Australian region, but species are known from South America, Japan, Korea, China, and Fiji (Barnard and Karaman 1991; Huang 2001; Kim et al. 2006; Myers and Lecroy 2009).

Paradexamine sp. SD1 is found associated with marine fouling communities, often on or among algae and marine invertebrates (Cadien 2007). In gammarid amphipods, sexes are separate, the young are brooded, and development is direct (Bousfield 1973). Little is known about the life history of species in this genus (Myers and LeCroy 2009). In California waters, it is found in bays and harbors, and is associated with algal turf and fouling communities (Cadien 2007; Chapman 2007). We have not found information on the feeding of amphipods in this genus, but omnivory is common in free-living gammaridian amphipods.

No impacts have been reported for Paradexamine sp. on the West Coast.

2007 Dexaminoidea of the NEP (Equator to Aleutians, intertidal to abyss): a review.. http://www.scamit.org/taxontools/toolbox/Phylum%20Arthropoda/Class%20Malacostraca/Order%20Amphipoda/Other%20Useful%20Tools/Dexaminoidea%20of%20the%20NEPmod.pdf