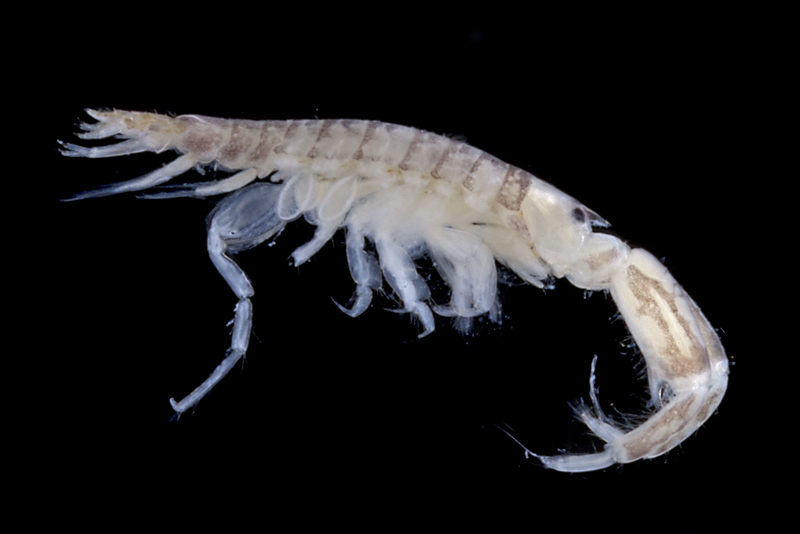 Monocorophium uenoi is a sedentary tube-building gammarid amphipod. It was described in Japan and its native range extends as far south as Hong Kong. It has been introduced to the Pacific coast of North America (from Northern California to Bahía San Quintín, Mexico), Chile, and the Netherlands. It is found in shallow marine and estuarine soft substrates and fouling communities where it builds tubes attached to hard surfaces and algae. It can also form U-shaped burrows in mud. Likely vectors for its introduction and spread include ballast water, hull fouling, and imports of Pacific oysters (Crassostrea gigas).

Monocorophium uenoi was described from the Sea of Japan and is also known from locations on Japan's Pacific coast and the Seto Inland Sea (Nagata 1960; Hirayama 1965; Aikins and Kikuchi 2002). It also occurs on the coast of China, along the East China Sea, and Hong Kong (Huang 2001; Hirayama 1986). Monocorophium uenoi has been introduced to the Northeast Pacific from Humboldt Bay, California to Bahia San Quintin, Mexico (Barnard and Reish 1959; Carlton 1979; Bousfield and Hoover 1997; Boyd et al. 2002; Chapman 2007). This species is also reported from Chile (Gonzalez 1991), and was recently found associated with oysters in the Netherlands (Faasse 2014). Likely vectors for its spread include ballast water, hull fouling, and exports of Pacific oysters (Crassostrea gigas) from Japan (Barnard and Reish 1959; Carlton 1979; Faasse 2014).

Monocorophium uenoi was reported from several locations on the coast of central Chile by Gonzales (1991), but does not give information on specific dates, habitats, or possible vectors. However, this region is an area of intense aquaculture (Castilla et al. 2005). In 2012, M. uenoi was found closely associated with Pacific Oysters in Yeserke, the Netherlands, but was not found in other nearby locations (Faasse 2014).

Monocorophium uenoi has a slender, depressed body with small, separated coxal plates, a fused urosome segment, and a distinct dorso-lateral notch. In males, the rostrum is long, ending about equally or just beyond the optical lobes, and Antenna 2 is longer and heavier than Antenna 1. In females, the rostrum is short, not exceeding the anterior lobes, and Antenna 2 is only slightly longer, but more robust than Antenna 1. In males, segment 1 of the peduncle of Antenna 1 is bluntly serrate and has 3 ventral spines. In the female, segment 1 has 3 stout spines, and segments 1-3 have many more setae than in the male. In males, segment 4 is somewhat inflated and has a very large distal tooth on the posterior side and 1-2 smaller teeth. Segment 5 (male) also has a distal process, but it is triangular and blunt. In females, segment 4 has 3 pairs of strong spines on the posterior surface and segment 5 has a stout median spine.

The gnathopods are not especially large or conspicuous in this genus. Segment 5 of Gnathopod 1 is slightly longer than segment 6, and the dactyl (segment 7) is twice as long as the palm of segment 6. On Gnathopod 2, segment 2 is longer than segment 5 and the dactyl bears 3 prominent, unequal teeth. Pereiopods 3 and 4 are very short, with a very broad segment 5, which partially covers segment 6. As noted above, the urosome segments are fused, but with a prominent lateral notch. Uropod 1 has short, unequal rami, each with 3-4 outer marginal spines. Uropod 2 is short, with the rami unequal, and the inner ramus often bare. Uropod 3 is uniramous, with the ramus longer than the peduncle. Adults are 2-5 mm long (Hirayama 1986; Chapman 2007). Centers of the pleonites and the segments of Antenna 2 are dark brown, mottled with white. There is a patch of pigment between the eyes, but it does not extend to the back of the head. The borders of the pleonites and most of the appendages are white (as shown in Faasse 2014). The description is based on: Crawford 1937, Hirayama 1986, Bousfield and Hoover 1997, Chapman 2007, and Faasse 2014.

Crassicorophium bonellii
A species of uncertain taxonomic status, not reported from the Northeast Pacific, possibly a parthenogenetic form of M. acherusicum or M. insidiosum, reported from high latitudes of the Northern and Southern Hemispheres, including the Northwest Pacific (Bousfield and Hoover 1997, Chapman 2007).

Monocorophium californiensis
A species of uncertain taxonomic status, not reported from northeast Pacific, possibly a parthenogenetic form of M. acherusicum or M. insidiosum, reported from high latitudes of the Northern and Southern Hemispheres, inlduding the northWest Pacific (Bousfield and Hoover 1997, Chapman 2007).

Monocorophium insidiosum
Native to the North Atlantic, introduced to the Pacific (Bousfield and Hoover 1997; Chapman 2007).

In its native range, M. uenoi tolerates a wide range of temperatures, including temperatures as high as 30 C (Hirayama 1986; Aikins and Kikuchi 2002). The extent of its salinity tolerance is not clear, but it has been collected from a range of locations. For instance, it was collected in parts of Humboldt Bay receiving freshwater drainage (Boyd et al. 2002), and in San Pablo Bay and the lower Sacramento River (Graening et al. 2012), as well as 'open sea' locations off southern California (Barnard 1969b). Habitats include intertidal muddy sandflats, oyster beds, mussel beds, seaweeds (Hirayama 1986; Larson 2009, Faasse 2014), and kelp holdfasts on the open coast (Barnard 1969b). Corophiid amphipods secrete threads of 'amphipod silk', to which the detritus is attached, to form its tubes. When the amphipods are abundant, the tubes form a mass in which the openings point outward or upward (Barnard et al. 1988). The tubes can be formed on the sediment surface, or attached to fouling on vertical surfaces such as rocks or pilings, or other fouling organisms (Barnard 1958).

Like other corophiid amphipods, M. uenoi is probably capable of feeding on phytoplankton, detritus and benthic microalgae on the sediment surface, and grazing on filamentous epiphytic algae growing on seaweeds and seagrasses (Bousfield 1973). In the Gamo Lagoon, Japan, M. uenoi fed on diatoms growing on the surface of the red alga Gracilaria vermiculophylla (Aikins and Kikuchi 2002). Fishes and shrimps are likely predators.

No impacts have been reported for Monocorophium uenoi in its introduced habitats.

Crawford, G. I. (1937) A review of the amphipod genus Corophium, with notes on the British species., Journal of the Marine Biological Association of the United Kingdom 21: 589-630