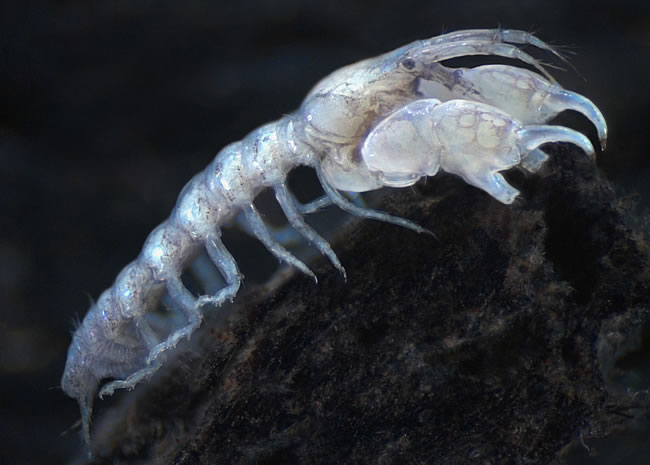 Sinelobus cf. stanfordi is a tube-building tanaid crustacean. Specimens, reported as 'S. stanfordi' have been recorded from locations around the world, including cold-temperate to tropical zones, fresh to hypersaline salinities, and a very wide range of habitats. It is likely a species complex and further taxonomic and biogeographic information is needed to confirm its native origin. It is considered to be introduced to the West Coast of North America, where it ranges from British Columbia to Southern California. It can live buried amongst mud and sand or as epifauna on corals, algae, and invertebrate fouling communities. It can be abundant in estuaries where it has been introduced, but no ecological or economic impacts have been reported.

Sinelobus stanfordi was described from Clipperton Island, an atoll located about 1500 km off the Pacific coast of southern Mexico (Richardson 1901; Sieg 1980). Tanaids identified as this species have been found in temperate and tropical estuaries of the eastern and western Atlantic and Pacific in both hemispheres. 'Sinelobus stanfordi' appears to be a complex of many species. Four additional species have been described, two from Australia (S. barretti; S. pinkenba), one from Hong Kong (S. bathykolpos), and an introduced species in the Netherlands (S. vanhaareni) (Edgar 2008; Bamber 2014). A specimen of Sinelobus sp. was collected in San Francisco Bay, California (CA) in 1943 (Miller 1968). Sinelobus sp. was later found to be established from the Fraser River estuary, British Columbia to San Diego Bay, CA, and abundant in many estuaries on the West Coast (Levings and Rafi 1978; Carlton 1979; Cohen et al. 1995; Cohen et al. 2002; Sytsma et al. 2004). The unidentified Sinelobus sp. established on the West Coast does not appear to match the descriptions of any of the described species (Cohen 2007), although we have not found detailed photographs, illustrations, or descriptions of undamaged West Coast specimens.

Please note: since we do not know the identity or origin of the West Coast Sinelobus, the distribution map shows the bioregion ranges of all the tanaids initially identified as S. stanfordi. We treat them all as cryptogenic, given the possibility of undiscovered invasions, except for the North American West Coast form, and the introduced European population, now described as S. vanhaareni.

Sinelobus 'stanfordi' is established on the East and Gulf Coasts of North America, from North Carolina to Mexico (Gardiner 1975; Power et al. 2006; Winfield et al. 2013). It has also been reported from Lake Okeechobee and tidal fresh habitats on Florida’s Gulf Coast (Heard et al. 2003), as well as many Caribbean Islands (Gardiner 1975). Because the origin of this species is unknown, we consider it cryptogenic here.

Sinelobus 'stanfordi' has been reported from tropical, subtropical, and temperate marine, estuarine, and freshwater habitats in three oceans, and the coastlines of all continents except Antarctica (Sieg 1980). It is now recognized as species complex, with at least five described species (Edgar 2008; Bamber 2014). One of the described Sinelobus species, S. vanhaareni, was described from brackish canals in the Netherlands (Van Haaren and Soors 2009; Bamber 2014), where it was clearly introduced. It has also been found in the Wadden Sea, and the entrance of the Kiel Canal, Germany (Buschbaum et al. 2012). The origin of this species is unknown.

Sinelobus 'stanfordi' has been collected in Eastern Pacific lagoons from Mexico to Colombia, and has been found at both ends of the Panama Canal (Jones and Rutzler 1975; Sieg 1980; Hendrickx and Ibarra 2008; Jarquín-González and García-Madrigal 2010). Populations on the Atlantic coast of Brazil, Uruguay, and Argentina are associated with fresh and brackish-water lagoons, and often with vegetation, rather than bare mud (Gardiner 1975; Gandra et al. 2006; Ambrosio et al. 2014). In Asia, S. 'stanfordi' has been reported from Thailand to the Kuril Islands, Russia (Sieg 1980; Yamanishi et al. 1991; Aikins and Kikuchi 2001; Gutu and Ansupanich 2004). One form from Hong Kong has been described as a new species, S. bathykolpos (Bamber 2014). Sinelobus 'stanfordi' spp. has also been reported from Australia and New Zealand, but two Australian populations have been described as separate species: S. barretti from Tasmania (Edgar 2008) and S. pinkenba (Bamber 2008, cited by Appeltans et al. 2015). Taxonomic studies of Sinelobus spp. are likely to uncover many cryptic species, but also some cryptic invasions.

Tanaids have a roughly cylindrical body, which is divided into three sections: a cephalothorax, with a small carapace, fused with first three thoracic segments; a pereaon (thoracic region), with 6 thoracic segments (peraeonites, segments 3-8); and an abdomen (pleon) consisting of 2-4 segments, and a small pleotelson. Both antennae are uniramous, but Antenna 1 is usually much longer and thicker than Antenna 2. Eyes are lacking in many species, but are conspicuous in Sinelobus spp. The most prominent thoracic appendages are a pair of large, claw-like chelipeds. Each pair of peraeonites bears a pair of walking legs (pereiopods). The pleonites bear 3-5 pairs of pleopods. A pair of uropods, uniramous or biramous, projects from the pleotelson. This description is based on Sieg and Winn 1981, Barnes 1983, Heard et al. 2003, and Cohen 2007.

Specimens, reported as 'S. stanfordi' have been reported from sites around the world. Morphological differences among animals from different locations (Galapagos, Japan, Bismarck Archipelago, and the Caribbean) have been noted by Gardiner (1975), though he considered these forms to be conspecific. Four additional species, previously identified as S. stanfordi, have been described since 2000, from Australia, Hong Kong, and Europe (see 'Potentially misidentified species'), but none quite match the Sinelobus sp. which is now widespread on the West Coast of North America (Cohen 2007). The only published illustration of a West Coast Sinelobus is of a damaged specimen collected in 1943 (Miller 1968; Cohen 2007). Here, we treat the genus Sinelobus as a worldwide species complex, since the West Coast populations are of unknown origin.

Sinelobus spp. have a 4-segmented Antenna 1 and a 6-segmented Antenna 2. The 4th segment of the peduncle of Antenna 2 lacks a distal tuft of setae. The abdomen consists of 4 pleonites and a telson. In all the described species, pleonites 1 and 2 have latero-dorsal rows of plumose setae which do not reach the dorsal midline. There are 3 pairs of pleopods on pleonites 1-3. The uropod is uniramous, with a basis and 3 distal segments, and the mid-distal segment being the longest. Sinelobus spp. are sexually dimorphic – the cephalon is narrowed anteriorly in the male, and the claws of the chelipeds are much larger, than in the female. Description based on: Richardson 1901, Gardiner 1975, Heard et al. 2003, Cohen 2007, Edgar 2008, and Bamber 2014.

The West Coast Sinelobus sp., unlike the described species of the genus, has 2 continuous rows of setae across the dorsal surface of Pleonites 1 and 2 (Cohen 2007). Based on the figure of Miller (1968), the anterior of the cephalon of the male is strongly narrowed, resembling that of the types of S. stanfordi (Richardson 1901) and S. vanhaareni, rather than S. barretti, S. pinkenba, and S. bathykolpos, in which the male's head is broader (Edgar 2008; Bamber 2014). The female develops a pair of brood pouches which protrudes posteriorly from the coxa of Pereiopod 5 (Gardiner 1975). Miller's (1968) male from San Francisco Bay was ~ 2 mm long. Males of S. 'stanfordi' from different locations (Clipperton, Galapagos, Kurile Islands, New Guinea, and Florida) ranged from 2.1 to 3.6 mm in size, and females from 2.5 to 3.0 mm (Gardiner 1975). The colors of various Sinelobus spp. are described as white to gray, mottled with dark brown (Richardson 1901; Heard et al. 2003; Edgar 2008; van Haaren and Soors 2009; Bamber 2014). A clear description and illustration of Sinelobus spp, from the West Coast as well as genetic and ecological studies, is highly desirable, given this tanaid's abundance in West Coast estuaries.

Sinelobus stanfordi
Described from Clipperton Atoll, ~600 km off the Pacific coast of Mexico (Richardson 1901). This named species and Sinelobus sp. on the West Coast of North America, are part of a wide-ranging species complex (Cohen and Carlton 1995; Edgar 2008; Bamber 2014).

Sinelobus vanhaareni
Described from Hoek van Holland, Netherlands (Bamber 2014). This species was introduced to the Netherlands, and its native region is unknown (Van Haaren and Soors 2009). Currently, the known range of S. van Haarnis ranges from the North Sea into Finland and Estonia in the Baltic Sea (Gagnon et al. 2021).

Sinelobus sp. is a tube-dwelling organism, usually associated with fine sediments which are needed to construct their tubes (Levings and Rafi 1978). Sinelobus cf. stanfordi has separate sexes and is strongly dimorphic. Fertilization is internal, and young are brooded in large, paired brood pouches attached to the coxae of Periopods 5 (Gardiner 1975; Barnes 1985; Toniollo and Masunari 2007).

Sinelobus cf. stanfordi has been reported from a wide range of climates, habitats, and salinities. Specimens from the West Coast of North America have occurred at temperatures of -2 to 27C, and salinities of 2.7 to 36 PSU (Levings and Rafi 1978; Cohen et al. 2002), and in habitats including intertidal mudflats, subtidal mud, oyster reefs, tubeworm reefs, pilings, buoys, and vessel hulls (Miller 1968; Levings and Rafi 1978; Cohen and Carlton 1995; Heiman et al. 2008). Over the cosmopolitan range of this species complex, 'S. stanfordi' has been collected at temperatures of -2 to 30C and salinities of 0-52 PSU (Gardiner 1975; Levings and Rafi 1978; Toniollo and Masunari 2007), and a wide range of habitats including mangroves, coral rock, aquatic vegetation, canals, freshwater lakes and streams (Gardiner 1975; Quinn and Hickey 1990; Garcia-Madrigal et al. 2005; Hendrickx and Ibarra 2008; van Haaren and Soors 2009). 'Sinelobus stanfordi' is usually characterized as a deposit feeder (Barnes 1983; Heiman et al. 2008), but animals from Brazil fed on the hydroid Eudendrium sp. (Toniollo and Masunari 2007). Sinelobus can reach extraordinary densities (up to 68,000 m-3) in the Fraser River estuary, British Columbia (Levings and Rafi 1978). At some times and locations, in the Sacramento-San Joaquin Delta, the comprised up to 50% of the diet for introduced Mississippi Silverside (Menidia audens), and 25% of the diet for introduced Yellowfin Goby (Acanthogobius flavimanus) (Howe and Simenstad 2007; Cohen and Bollens 2008). It was also eaten by a shorebird, Western Sandpiper (Calidris mauri), in the Fraser River Delta (Sewell 1996).

Sinelobus cf. stanfordi can reach extraordinary densities (up to 68,000 m-3) in West Coast estuaries, and are a potential food item for fishes, shorebirds, and other predators (Levings and Rafi 1978).

Arocena, Rafael (2007) Effects of submerged aquatic vegetation on macrozoobenthos in a coastal lagoon of the southwestern Atlantic, International Review of Hydrobiology 92(1): 33-47

Berkenbusch, Katrin; Rowden, Ashley A. (2007) An examination of the spatial and temporal generality of the influence of ecosystem engineers on the composition of associated assemblages., Aquatic Ecology 41: 129-147

Blazewicz-Paszkowycz, Magdalena; Bamber, Roger; Anderson, Gary (2012) Diversity of Tanaidacea (Crustacea: Peracarida) in the world’s oceans- How far have we come?, PLOS ONE 7(4): e33068

Gardiner, Lion F. (1975) Fresh- and brackish-water tanaidacean, Tanais stanfordi Richardson, 1901, from a hypersaline lake in the Galapagos archipelago, with a report on West Indian specimens, Crustaceana 29(2): 127-139

Sieg, Jürgen, Winn, Richard N. (1981) The Tanaidae (Crustacea; Tanaidacea) of California, with a key to the world genera, Proceedings of the Biological Society of Washington 94(2): 315-343

Yamanishi, Ryohei; Yokoyama, Hisashi; Ariyama, Hiroyukii (1991) Distributional and seasonal changes of intertidal attaching organisms in relation to water quality along the brackish reaches of the Yodo River., Occasional Papers from the Osaka Museum of Natural History 2(7): 83-96