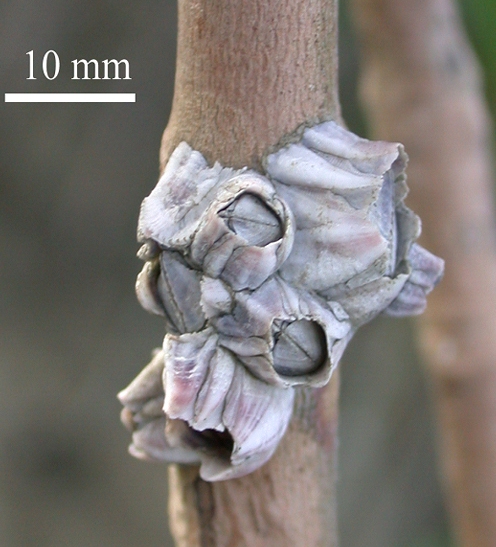 Fistulobalanus albicostatus is native to the Northwest Pacific from Japan and Korea to Sumatra. Introduced specimens of this barnacle have been found in California, France, and New Zealand; however, to our knowledge, none of these translocations has resulted in an established population. Introductions of F. albicostatus have largely occurred with imported oysters or as fouling on oil-drilling platforms. This barnacle occurs in rocky intertidal areas, on oysters, mangroves, submerged wood, and man-made structures.

Fistulobalanus albicostatus is native to the Northwest Pacific from Japan and Korea to Sumatra (Pilsbry 1916; Henry and McLaughlin 1975; US National Museum of Natural History 2011). It occurs in rocky intertidal areas, on oysters, mangroves, submerged wood, and manmade structures (Pilsbry 1916; Henry and McLaughlin 1975; Foster and Willan 1979). Specimens of this barnacle have been found in California, France, and New Zealand, on imported oysters or as fouling on oil-drilling platforms (Carlton 1979; Foster and Willan 1979; Goulletquer et al. 2002). However, to our knowledge, none of these translocations has resulted in established populations.

Fistulobalanus albicostatus was found in California several times, being associated with planted batches of Pacific Oysters (Crassostrea gigas). In 1930, it was reported in Elkhorn Slough and Marin County, San Francisco Bay (USNM 63368, US National Museum of Natural History 2011) and in 1943 it was reported in Morro Bay (Carlton 1979). It has also been found on ship fouling in Vancouver Harbor, British Columbia (Sylvester et al. 2011). However, no established populations have been found (Carlton 1979).

Fistulobalanus albicostatus was found on transplanted oysters (Crassostrea gigas) in France, in 1973, in Bourgneuf Bay and at Le Croisic, both on the northern Bay of Biscay. These barnacles did not become established (Goulletquer et al. 2002). This barnacle was also found in New Zealand, in 1975, on an oil platform towed from Japan (Foster and Willan 1979), and on Australian naval ships that had served in Japanese waters (Allen 1953). Again, these introductions did not result in established populations.

Fistulobalanus albicostatus is a barnacle with a conical or cylindro-conical shell, which varies with the amount of crowding. The orifice (opening) of the shell is rhomboidal, moderately toothed, and its width is more than half the shell diameter (measured from the carina to the rostrum). The shell surface usually has prominent white ribs. The radii (overlapping areas of shell plates) are wide, striated (streaked), and tinted with pink or purple. The scutum has weak, faint striae (streaks). The articular ridge is half the length of the tergal margin, and high and curved. The distance between the adductor ridge and articular ridge is further than in Amphibalanus amphitrite. The tergum is narrow and long, as is its spur (the length is 1/4 the length of basal margin, and the width is 3/10 width of basal margin). The carinal margin is short and arched. The diameter (from the rostrum to the carina) of the largest specimens was 16.5 mm (Pilsbry 1916, Henry and McLauglin 1975). The larval development of Fistulobalanus albicostatus is described by Lee and Kim (1991).

Fistulobalanus albicostatus, like many other barnacles, is hermaphroditic, but is capable of cross-fertilization. The fertilized eggs are brooded in the mantle cavity, sometimes for several months, and are released as nauplius larvae with three pairs of appendages (Barnes 1983). The nauplii feed in the plankton and go through five successive molts, spending 6 to 23 days in the water column before molting into a non-feeding cypris stage, covered with a pair of chitinous shells (Lee and Kim 1991; Desai et al. 2006). Cyprids swim, investigating suitable surfaces, and then settle, secreting a shell and molting into the first juvenile barnacle stages. Juvenile and adult barnacles are filter feeders, sweeping the water with their long bristled appendages to gather phytoplankton, zooplankton, and detritus (Barnes 1983).

Fistulobalanus albicostatus is typically found in the mid-to-lower intertidal and in sheltered waters. This barnacle grows on a wide range of hard surfaces, including docks, logs, mangroves, rocks, ship hulls, oysters, and other shellfish (Allen 1953; Utinomi 1970; Henry and McLaughlin 1975).

Fistulobalanus albicostatus has been introduced to several locations, but has not yet become established and has had no known impacts.