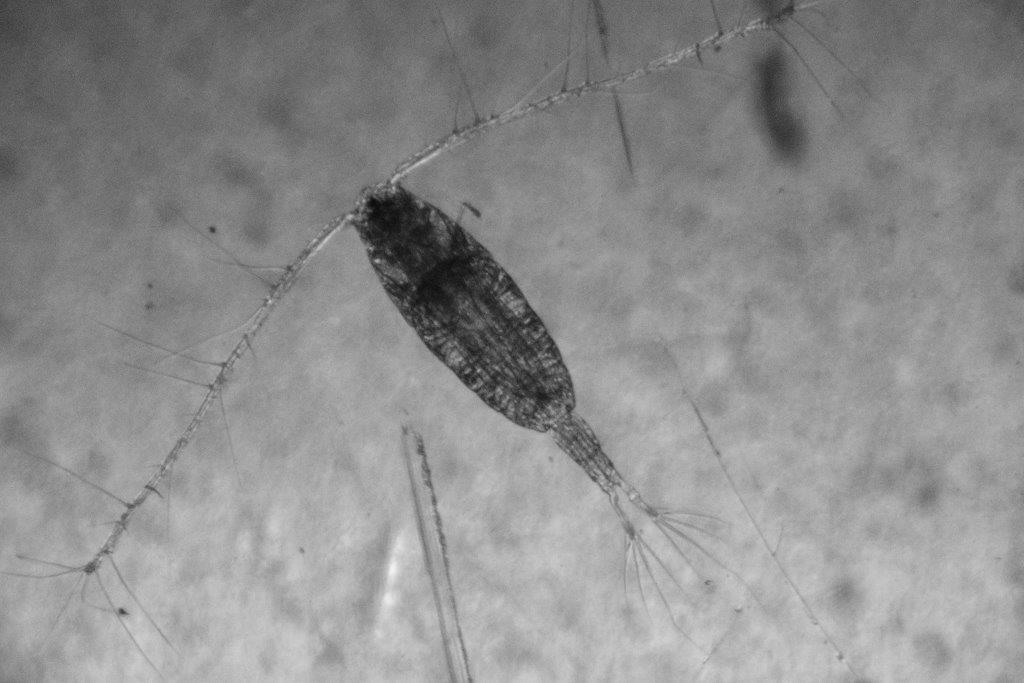 Acartiella sinensis is a planktonic calanoid copepod. It is native to estuaries in Southeastern China, Thailand and Sri Lanka. It is associated with warm, low-salinity waters and has been recorded in ballast water aboard commercial vessels arriving on the US West Coast. It is established in San Francisco Bay, California and individuals have been found in the Columbia River, Oregon, but a population is not known to be established there. It is abundant in San Francisco, but the extent to which it has had any impacts on native species or foodwebs, if any, is unknown.

Acartiella sinensis is a planktonic calanoid copepod native to estuaries in Southeastern China from Fujian Province to Thailand (Shen and Lee 1963; Chen and Zhang 1965; Orsi and Ohtsuka 1999; Wong et al. 2000). It has also been reported from harbors in Sri Lanka (Chandrasekera and Fernanado 2009) and a freshwater lake in Thailand (Pholpunthin 1997). It is associated with warm, low-salinity waters (Chen and Zhang 1965). In 1993, it was discovered in Suisun Slough, in the San Francisco estuary, where it was introduced through ballast water, and is now abundant (Orsi and Ohtsuka 1999; Bollens et al. 2011). Acartiella sinensis was also collected from the Columbia River estuary in very small numbers, but did not become established (Sytsma et al. 2004).

Acartiella sinensis was first collected on October 7, 1993 in Suisun Slough and Suisun Bay, in the inland portion of the San Francisco Bay estuary, California. It was subsequently found in much of the estuary, from freshwater to salinities above 20 PSU, but is most abundant in areas from 2.5 to 8.6 PSU (Orsi and Ohtsuka 1999). It occurs in all three sections of the lower estuary (San Pablo, Central, and South San Francisco Bay), but is most abundant in San Pablo Bay in January through May, where and when salinities are likely to be lowest, especially during years of high river flows (Bollens et al. 2011).

Acartiella sinensis has been collected in small numbers in the Columbia River estuary, Oregon starting in 1997, but 'only a few specimens have been found and populations are not known to be established’ (Sytsma et al. 2004). This copepod has been found in ballast water aboard ships in Puget Sound, Washington so future invasions are possible (Cordell et al. 2008a).

Copepods of the family Acartiidae are characterized by small size, and a slender, elongate body form. The head is separate from the thorax, and has a blunt apex, slightly narrowed distally, with a single eye, lacking cuticular lenses. The posterior corners of the thoracic segments are rounded (Brodskii 1967). The caudal rami are narrow and elongated. This copepod is characteristic of warm, low-salinity water, and sometimes occurs in fresh water (Shen and Lee 1963).

To our knowledge, naupliar and copepodite development in this genus has not been described. Nauplii probably resemble those of Acartia spp.

Planktonic calanoid copepods mate in the water column. Males use their modified antenules and 5th pair of swimming legs to grasp the female and transfer spermatophores to the female's genital segment. Female copepods of the family Acartiidae lay unattached eggs, one at a time, in the water column (Barnes 1983). Eggs hatch into nauplii which go through six stages. The first stage, NI, has 3 pairs of appendages and is unsegmented - each molt has additional appendages and/or more differentiation of segments. The sixth stage (NVI) molts into a first copepodite stage (CI), with the basic form of the adult, and fully differentiated feeding structures, but with only two pairs of swimming legs, and only one urosomal segment. The copepod goes through five additional molts, with increasing numbers of swimming legs, urosomal segments, and sexual differentiation. The sixth (CVI) stage is the male or female adult (Barnes 1983; Johnson and Allen 2005).

Acartiella sinensis is characteristic of estuaries with warm, low-salinity waters (Chen and Lee 1963; Orsi and Ohtsuka 1999; Wong et al. 2000), and has landlocked freshwater resident populations (Pholpuntin 1997). Early stages probably feed on phytoplankton, but adults also capture copepod nauplii and copepodites (Barnes 1983). In experiments, adults of A. sinensis showed little feeding on protists, but did feed on early stages of Limnoithona tetraspina (York et al. 2014). In later studies, Acartiella sinensis was found to have a significant predation impact on nauplii of Pseudodaptomus forbesi and Limnoithona tetraspina, averaging 11 and 4 % per day, respectively. Rates of predation on adults and copepodites were ~1% per day (Slaughter et al. 2016).

The planktonic copepod Acartiella sinensis is abundant, but not dominant in the upstream portions of the San Francisco estuary (Orsi and Ohtsuka 1999; Bollens et al. 2011). The extent to which is has displaced native species, or altered food webs, in the estuary is unclear. In experiments, A. sinensis fed heavily on nauplii and copepodites of Limnoithona tetraspina and Pseudodiaptomus forbesi (York et al. 2014; Slaughter et al. 2016).

Barthelemy, R-M. (1999) Functional morphology and taxonomic relevance of the female genital structures in Acartiidae (Copepoda: Calanoida), Journal of the Marine Biological Association of the United Kingdom 79: 857-870