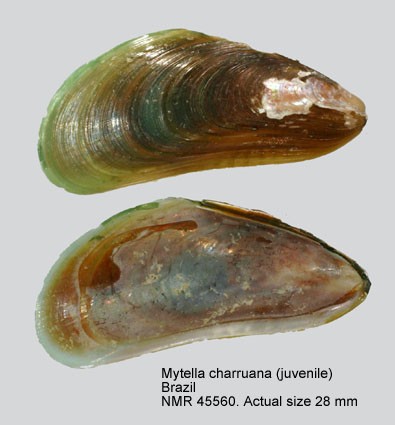 Mytella charruana is commonly known as the Charru Mussel. It is native to the tropical Western Atlantic from Colon, Panama to Argentina. It has been introduced to the southeastern United States, first found in Florida in 1986. It now appears to be established from central Florida to the central Georgia coast. In its introduced range, it is found on oyster beds, shells, wood, and roots, but adult mussels are most common on man-made substrates, such as docks and power plants. This mussel can tolerate a wide range of salinities, but its tolerance of low temperatures is limited. There are no ecological impacts reported for this species, but in Florida, this mussel caused economic damage by clogging the intake systems of an electrical power plant.

Image Credit: the World Register of Marine Species (WoRMS) from the Natural History Museum of Rotterdam via a Creative Commons (CC BY-NC-SA) License

Mytella charruana is native to the tropical Western Atlantic from Colon, Panama (Ruiz et al., unpublished data) to Argentina (Lee 2001; Boudreaux and Walter 2006; Gillis et al. 2009). This mussel is also reportedly present in the tropical East Pacific, from Sonora, California to Ecuador, and the Galapagos Islands. However, Ecuadoran specimens were genetically distinct from Colombian (Caribbean Sea) or southeast US specimens, and showed no genetic overlap at the examined DNA sites (Gillis et al. 2009). Pacific M. charruana could represent a distinct cryptic species from the Atlantic form.

In 1986, a heavy infestation of small mussels, later identified as Mytella charruana clogged the intakes of the Blount Island electrical generating plant in Jacksonville, Florida (FL). The mussels disappeared in the winter of 1987, but reappeared in the St. Johns estuary in 2006 (Lee 2008). In 2006 and 2007, they were found in small numbers, and in 2008, they again clogged the Blount Island Power plant (Lee 2008). It is not clear whether small, undetected populations persisted after the die-off, or whether the initial population was completely extirpated, and one or more subsequent invasions occurred. Genetic studies have found high genetic diversity, exceeding that in native Colombian populations (Gillis et al. 2009). In 2004, Mytella charruana was discovered in Mosquito Lagoon, FL part of the Indian River Lagoon system (Boudreau and Walters 2006). After 2006, they were found along the coast north to South Carolina, and appear to be established from central Florida to the central Georgia coast (Lee 2008; USGS Nonindigenous Species Program 2008; Gillis et al. 2009; Spinuzzi et al. 2012). Sporadic records have occurred north to Charleston, South Carolina (Pam Fuller, USGS, personal communication). However, severe winter weather in 2010 and 2011 has affected the abundance of other warm-water invaders in the region (Perna viridis, Green Mussel; Petrolisthes armatus, Green Porcelain Crab; Canning-Clode and Fowler, unpublished data), and has also reduced the range or abundance of M. charruana (Spinuzzi et al. 2012).

In 2014, Mytella charruana was genetically identified in the port of Manila, Philippines, and found to be established in Manila Bay (Vallejo et al. 2017).

Mytella strigata is small, thin-shelled, and lacks exterior ribs on its shell surface. On the interior of the shell the byssal retractor scar is nearly circular, and located further from the back than the more elongated, irregular scar in Mytilus edulis. The outside of the shell is light-green to black, and may be uniform or banded in a crisscross pattern. The internal surface of the shell is purple. The largest reported specimen of M. strigata is 48.7 mm, but a more typical size is 20-25 mm. (Description from: Lee 2001; Boudreaux and Walters 2006; Stenyakina et al. 2010)

This mussel was widely known under the name M. charruensis (d'Orbigny, 1846). Lim et al. (2018) and other recent authors (Sampanich and Wells 2019) and Tay et al. (2019) use the name Mytella strigata for this mussel, based on a detailed examination of 19th century publication dates (Lim et al. 2018). The World Registry of Marine Species now uses uses M. charruana (Appeltans et al. 2019).

Mytella strigata maintains separate sexes under conditions of steady food supply, but starvation results in a change of many individuals from female to male (Stenyakina et al. 2010). Eggs and sperm are released into the water. Development is planktotrophic with eggs developing into planktotrophic larvae and veligers, settling after about 14days at 29 C (Tan et al. 2018).

Mytella strigata is especially common in estuarine and lagoon environments. In Brazil, it is known from mangrove, mudflat, and rocky habitats (de Oliveira et al. 2005). In its introduced range, in the southeast US, it has been found on oyster beds, disarticulated shells, wood, roots, etc., but adult mussels were more common on artificial substrates, such as docks and power plants (Gilg et al. 2010; Lee 2001-2011). This mussel tolerates a wide range of salinities from 2 to 40 PSU (Yuan et al. 2010), but tolerance of low temperatures is limited. N the St. Johns River estuary, Florida, M. charruana was found at sites with average salinities ranging from 13 to 33 PSU, and highest densities at a mean salinity of 21 PSU). The upper temperature limit is at least 31?C, and likely to be higher (Brodsky et al. 2009- http://www.sicb.org/meetings/2009/schedule/abstractdetails.php3?id=413). I

In its introduced range in the southeastern US, Mytella charruana has shown a preference for settlement on natural substrates, such as disarticulated shells, wood, roots, etc., but survival was much greater on artificial substrates, such as docks and power plants (Gilg et al. 2010; Lee 2001-2011). Consequently, strong ecological impacts have not been reported in natural environments. This mussel is a local food resource in Brazil (de Oliveira et al. 2005), but is too small and rare to be utilized in the US.

In Thailand, extensive invasion by Mytilopsis sallei and Mytlella strigata (Charru Mussel) has coiverted soft-bottom lagoon communities to hard-bottom systems, resulting in the appearance and spread of some species requiring hard substrate, and the disappearance of others.  However, overall changes in species richness were not seen (Wangkulangkul et al. 2022).

Madrid, Maycol; Collin, Rachel (2021) A checklist of the mollusks from the Miraflores and Pedro Miguel locks, Panama canal, panama, Technociencia 23(2): 125-150