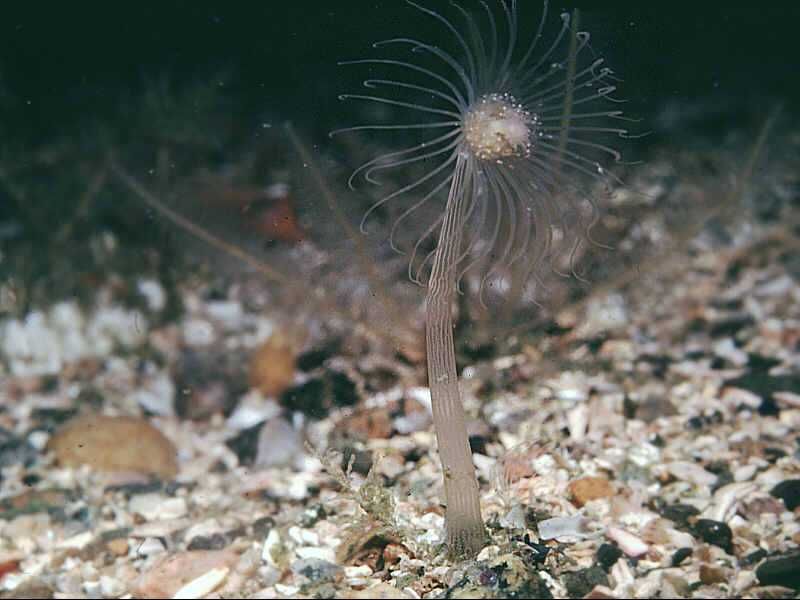 Corymorpha sp. A. is a very small (2-3 mm height) unidentified hydroid, known only from Point Richmond and Lake Merritt, both in San Francisco Bay, California. It was found in shallow, soft-bottom habitats of variable salinity. We know of no other recent records for this hydrozoan and no impacts have been reported in San Francisco Bay.

Image Credit: Encyclopedia of Life via the Creative Commons CC BY-NC-SA 3.0 License. Original image from the Encyclopedia of Marine Life in Britian and Ireland. Please note that the image is of Corymorpha nutans not Corymorpha sp.A.

Corymorpha sp. A is a small, unidentified mud-dwelling hydroid, known only from Point Richmond and Lake Merritt, Oakland, California (a lagoon of San Francisco Bay). Its introduced status is based on the fact that no similar hydroid has been reported from elsewhere on the West Coast. In Lake Merritt, it exists in a community composed primarily of introduced species (Carlton 1979; Cohen and Carlton 1995). It was reportedly similar to the Atlantic species C. nutans (Cadet Hand, personal communication, Carlton 1979), but the form illustrated by Mills et al. (in Carlton 2007, Plate 41J) is clearly different from C. nutans in size, tentacle numbers, and other features (Bouillon et al. 2004; MarLin 2004).

Hydroids of Corymorpha sp. A were found by M. Jones in 1955-1956 at Point Richmond in central San Francisco Bay, and by J.T. Carlton in 1967 at Lake Merritt, Oakland (Carlton 1979; Mills et al., in Carlton 2007) in shallow, soft-bottom habitats of variable salinity. We know of no other recent records of this hydrozoan.

Corymorpha sp. A is a very small (~3 mm height) unidentified hydroid, known only from Point Richmond and Lake Merritt, Oakland, California (a lagoon of San Francisco Bay). Carlton (1979) describes it as ‘a tiny corymorphid hydroid with an orange tint in life’. It appears to be closest to Corymorpha nutans, a Northeast Atlantic species (Cadet Hand, personal communication, Carlton 1979). A medusa is not known for Corymorpha sp. A, but C. nutans does have a medusa stage. The genus name is tentative.

Corymorpha sp. A is illustrated by Mills et al. (in Carlton 2007, Plate 41J, but not included in the key), as a solitary polyp, with a stalk ending in a pointed base, a spindle-shaped hydranth, and six filiform (thread-like) tentacles in a single whorl below a conical hypostome. The illustration shows the base of the stem as tapered, ending in a point, with no rootlets.

Corymorpha nutans, although reportedly similar to Corymorpha sp. A (Cadet Hand, personal communication, Carlton 1979), is much larger, up to 100 mm height, with a thick cylindrical stem and about 20-80 short oral tentacles around the mouth of the hypostome, and a whorl of 20-32 longer tentacles around the base of the hypostome. Gonophores bearing medusa buds are located between the two whorls of tentacles. The base of the stem terminates in rootlets, which attach to the substrate. The hydroid is white to pale red, darkening to bright red around the mouth (Bouillon et al. 2004; MarLin 2011). This hydroid has a medusa, up to 6 mm in height, which is described in Bouillon et al. (2004).

Corymorpha nutans
Corymorpha nutans is larger than C. sp., up to 100 mm in height, and can be mistaken for an anemone, with a thick stem. It has two whorls of tentacles, 20-80 short oral tentacles, and 20-30 longer tentacles at the base of the hypostome. It is known from the East Atlantic, the Mediterranean Sea, and the Gulf of Mexico (Bouillon et al. 2004).

Corymorpha sp. A inhabits mud bottoms in ‘shallow, brackish water’ (Carlton 1979). It is not known whether C. sp. A possesses a sexually reproducing medusa, as in the other corymorphids C. nutans and Euphysora bigelowi, or reproduces sexually through attached gonophores, as in the southern California species C. palma (Bouillon et al. 2004; Mills et al., in Carlton 2007). Sexual reproduction would produce planula larvae, which seek out a suitable substrate, and metamorphose into new hydroids (Barnes 1983). These hydroids probably feed on zooplankton or small epibenthic fauna. A nudibranch, Cuthona divae, is reported to feed on 'Corymorpha sp.' (McDonald, in Carlton 2007), which could include this species.

There are no reported impacts of Corymorpha sp. A in San Francisco Bay.