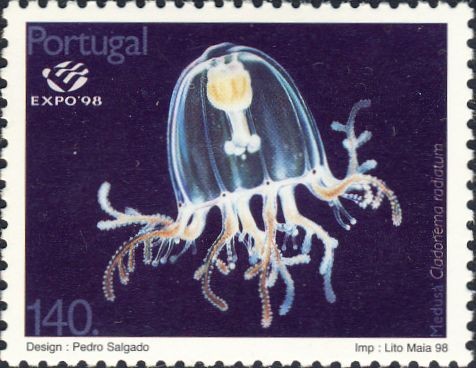 The hydrozoan Cladonema radiatum has a conspicuous planktonic medusa stage and a small, creeping hydroid stage. It is native to European waters where it can be found from Norway to the Mediterranean and Black Seas. It has been reported from Bermuda, Florida, the Bahamas, Puerto Rico, Belize, and Brazil, but we consider it as being cryptogenic in the tropical Western Atlantic. Introduced populations have been reported from Padilla Bay, Washington; Oahu, Hawaii; and Wellington, New Zealand. It commonly settles on algae or seagrasses, such as the Mediterranean Posidonia oceanica or the temperate eelgrass Zostera marina. No impacts have been reported for this species.

Cladonema radiatum is native to European waters where it can be found from Norway to the Mediterranean and Black Seas (Schuchert 2006). It has also been reported from Bermuda, Florida, the Bahamas, Puerto Rico, Belize, and Brazil (Mayer 1910; Migotto 1996; Calder 1998; US National Museum of Natural History 2009). We consider C. radiatum to be cryptogenic in warm Western Atlantic waters, perhaps representing a separate, cryptic species. Cladonema radiatum has been reported from Japan, Pacific Russia, and Korea (Hirohito 1988, cited by Schuchert 2006). However, these records could refer to C. pacificum (=C. uchidae), which has been treated as conspecific with C. radiatum by some workers (Rees 1982). Introduced populations have been reported from Padilla Bay, Washington; Oahu, Hawaii; and Wellington, New Zealand.

Cladonema radiatum has been collected in Padilla Bay, Washington, starting in 1988. The hydroids are abundant on the eelgrass Zostera marina (Mills, in Cohen et al. 1998; Mills et al., in Carlton 2007).

Cladonema radiatum is considered introduced in Oahu, Hawaii, where it was first found in 1972 (Cook 1977a, cited by Carlton and Eldredge 2009).

Cladonema radiatum is considered to be introduced in Wellington, New Zealand, where it was first found in 1953 (Cranfield et al. 1998; Schuchert 2006).

The hydroid Cladonema radiatum consists of polyps, usually single, but rarely branched, arising from branching stolons. The club-shaped hydranth has two whorls of tentacles: one oral whorl, just below the mouth, consisting of four capitate tentacles (ending in bulbs); and a lower (aboral) whorl, near the base of the hydranth, consisting of filiform (threadlike) tentacles. The perisarc terminates below the filiform tentacles. The hypostome is rounded, with a pre-oral chamber. The medusa buds are naked, and located between the two whorls of tentacles. Hydroid colonies are about 25 mm long, and the hydranths about 1 mm high- polyps are estimated at about 2-3 mm high. Hydroids occur on the Mediterranean sea grass Posidonia (Bouillon et al. 2004; Schuchert 2006). In Padilla Bay, WA, the hydroids occur on Zostera marina (Eelgrass) (description from: Mills, in Cohen et al. 1998; Mills et al., in Carlton et al. 2007).

The umbrella of the medusa of C. radiatum is bell-shaped, slightly higher than wide, and sometimes with a slight apical projection. The velum is rather broad. The manubrium is spindle-shaped, and is as long as, or slightly shorter than the bell cavity. It has some pouch-like protuberances in the middle region, composed of gonadal tissue. Four to five spherical nematocyst clusters are located just above the mouth. The radial canals may divide near their junction with the manubrium. The number of tentacles corresponds with the number of radial canals, typically 8-10 in a mature medusa. The base of each tentacle contains an ocellus (eyespot). The tentacles have an elongated, thickened base, and are branched. The long main branch gives rise to several short tentacles which act as adhesive organs- these have a spherical swelling at the end. The main branch then gives off up to five side branches, with nematocyst clusters, including one large terminal cluster. The stomach and marginal tentacles are red, bright-red or brown; the ocelli are black or deep crimson. The medusae are about 1 mm in diameter when released, and about 3 mm when mature. Medusae are capable of swimming in the water column, but mostly remain attached to surfaces (description from: Bouillon et al. 2004; Schuchert 2006). It is possible that this wide-ranging hydrozoan is a complex of cryptic species (Schuchert 2006).

Cladonema uchidae
Cladonema radiatum has been reported from Japan, Pacific Russia, and Korea. These records could refer to C. pacificum. It is not clear whether these species co-occur in Northwest Pacific waters (Rees 1982).

The hydroid colonies of Cladonema radiatum produce medusa buds, which in turn develop into medusae that are released. The medusae can swim, but spend a lot of their time attached to surfaces. They feed on zooplankton and when mature release sperm or brood eggs. They are usually single-sexed, and rarely hermaphroditic. The eggs are fertilized and released as planula larvae, which settle on a suitable substrate and develop into new hydroids (Schuchert 2006). They commonly settle on algae or seagrasses, such as the Mediterranean Posidonia oceanica or the temperate eelgrass Zostera marina (Schuchert 2006).

No impacts have been reported for Cladonema radiatum in invaded waters.