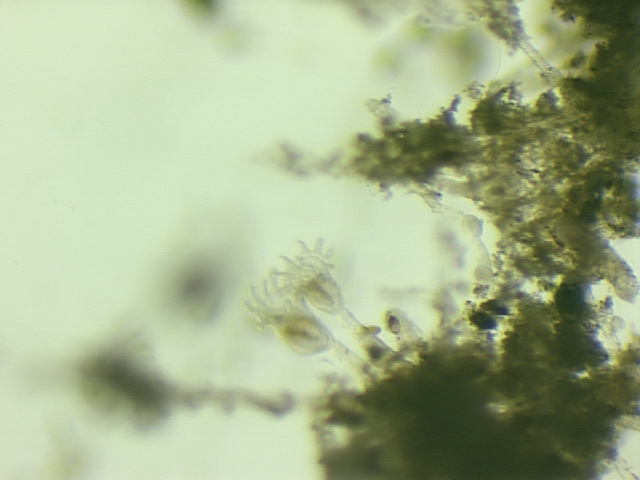 Loxosomatoides laevis is an entoproct or kamptozoan. Kamptozoans are colonial animals consisting of many zooids connected by a stolon. Colonies of L. laevis consist of a thick fur of zooids, spreading over a substrate. It was first described from Chilka Lake, an estuary of the Bay of Bengal, India, in 1915 and is believed to be native to the Indo-Pacific. The only known introduced population is from Chesapeake Bay, where it is an abundant but easily overlooked fouling organism. It is typically found in estuaries, often in brackish waters. No economic or ecological impacts have been reported.

Loxosomatoides laevis, a kamptozoan (or entoproct) was first described from Chilka Lake, an estuary of the Bay of Bengal, India, in 1915, and was subsequently found in Japan in 1951. All but one of the other members of the genus are confined to Asian waters; one South American species may belong to another genus (Wasson et al. 2000).

The only known occurrence of Loxosomatoides laevis outside the Indo-Pacific is in the Chesapeake Bay, where it was first identified on the Smithsonian Environmental Research Center, Marine Invasions Program settling plates in 1994. It was found in sites in the upper and lower Chesapeake Bay. In 1994-1997, it was collected in the Chester River (Maryland), Baltimore Harbor; the Rhode River and West Rivers (Maryland); and Norfolk Harbor (Virginia) (Wasson et al. 2000). It was not collected in early studies of entoprocts in the Chesapeake Bay (Osburn 1944) or other East Coast sites (Woods Hole, Massachusetts; North Carolina; South Carolina) (Wasson et al. 2000).

Loxosomatoides laevis is a kamptozoan. Kamptozoans are colonial animals consisting of many zooids connected by a stolon. A zooid consists of a stalk, which is topped by the body of the animal, in a cup-shaped structure, called the calyx. The upper edge of the calyx bears 12-14 tentacles, surrounding the mouth, which faces upward. The upper surface of the body, surrounded by tentacles, includes both the mouth and the anus, leading to the term 'entoproct' (Barnes 1983; Wasson et al. 2000).

In L. laevis, the stalk is wide (~73 µm), un-segmented, and 399-705 µm long. The stalk narrows at the base of the calyx. The calyx is small (200-270 µm long) and compressed laterally. This kamptozoan produces dark brown hibernacula (144-240 µm) - these are modified zooids for survival under adverse conditions. Zooids are single-sexed, but colonies may be hermaphroditic (Wasson et al. 2000).

The colonies consist of a thick fuzz or fur of zooids, spreading over substrates. Budding can occur from the upper nodes, resulting in stolons which grow down to the substrate. This kamptozoan is typical of estuaries, often in brackish waters. It grows on and among other fouling organisms, such as barnacles, bryozoans, tube-dwelling polychaetes, and tunicates (Wasson 1997; Wasson et al. 2000).

The entoproct (or kamptozoan) Loxosomatoides laevis forms large, fuzzy colonies, reproducing asexually by budding new zooids from stolons. The colonies are hermaphroditic, and reproduce sexually (Wasson et al. 2000). The eggs are brooded internally in a large brood chamber. The larva is unknown, but probably is lecithotrophic, and spends only a few hours in the plankton. Hibernacula (modified zooids) provide a means for the colonies to persist through unfavorable conditions (Wasson et al. 2000). Loxosomatoides laevis is known only from estuaries, often in brackish waters (Wasson et al. 2000).

Loxosomatoides laevis is only known to be introduced in Chesapeake Bay, where it is an abundant but easily overlooked fouling organism. No economic or ecological impacts have been reported.