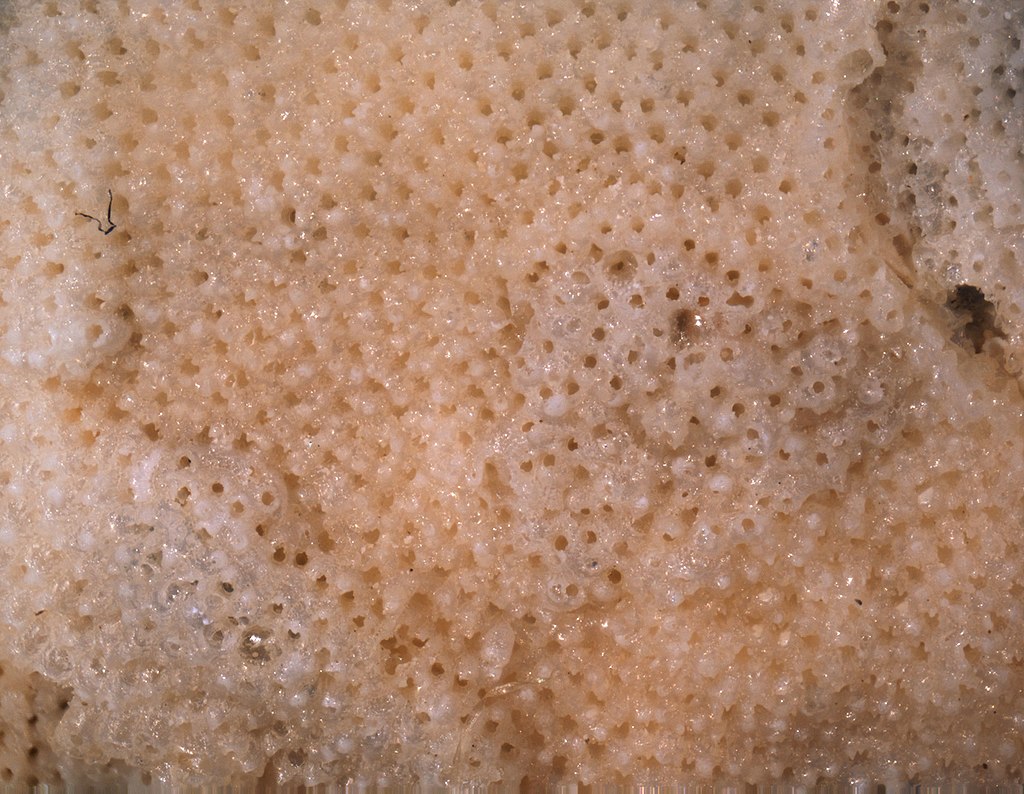 Hippopodina tahitiensis is an encrusting bryozoan that forms extensive colonies.  Its native and introduced ranges are unclear due to its confusion with H. irirkiriensis and H. feegeensis. It is considered native to the Indo-West Pacific from French Polynesia and Vanuatu to Australia and Singapore. It is considered introduced in the Hawaiian Islands, and in the Western Atlantic from Puerto Rico to Brazil. In the Eastern Pacific it was found on Gorgona Island, on the Pacific coast of Colombia and was collected in the Galapagos Islands in 2016. Impacts are unknown.

Hippopodina tahitiensis was described from French Polynesia by Leca and d'Hondt (1993), and then was later recognized by Tilbrook (1999) as widely distributed species, frequently confused with H. feegeensis. This bryozoan is considered native to the Indo-West Pacific, from French Polynesia and Vanuatu to Australia and Singapore.  It is considered introduced in the Hawaiian Islands (1948, Carlton and Eldredge 2009) and in the Western Atlantic from Puerto Rico to Brazil (Osburn 1940; Vieira et al. 2008). In the Eastern Pacific it was found on Gorgona Island, on the Pacific coast of Colombia (Hastings 1930) and was collected in the Galapagos Islands in 2016 (McCann et al. 2019).

The extent of invasions by Hippopodina tahitiensis is unclear because most records are reported as H. feegeensis (Tilbrook 1999; Tilbrook et al. 2006). There is also possible confusion with H. irirkiriensis (McCann et al. 2019).  Hippopodina tahitiensis was first collected as H. feegeensis in Hawaii in 1948 and has been found in several bays and harbors on Oahu (Carlton and Eldredge 2009). The first record in the Eastern Pacific was from Gorgona Island, Pacific Colombia (Hastings 1930, as H. feegeensis).  As H. feegeensis it has been reported from Puerto Rico, the Gulf of Mexico, the Tortugas, and Brazil (Osburn 1940; Vieira et al. 2009). Further morphological and genetic identification of Atlantic specimens is desirable.

Hippopodina tahitiensis is an encrusting bryozoan, often forming extensive colonies. The autozooids are roughly rectangular, lightly calcified, and separated by well-defined grooves. The frontal wall is convex, covered with tubercles, and perforated by 10-12 pseudopores. The primary orifice is hoof-shaped, rounded distally, and with lightly narrower proximal margins. There are two lateral condyles. The avicularia are short and stout and usually single, but sometimes paired or lacking. They are usually placed above the orifice and medially directed. The ovicells are large, flat, and embedded, and perforated with numerous pseudopores. H. irikriensis is distinguished by a triad ancestrula, but the ancestrula of H. tahitiensis has not been observed (Leca and d'Hondt 1993; McCann et al. 2019).

Hippopodina tahitiensis was described from French Polynesia as Hippoppetraliia tahitiensis (Leca and d'Hondt 1993). Tilbrook described this bryozoan as H. virosa, before recognizing it as a synonym (Tilbrook 2006). It has been widely confused with H. feegeensis Busk 1844 and H. irirkiriensis (Tilbrook 199; Tilbrook et al. 2006).

Hippopodina irikiriensis
Tilbrook 1999. The two species differ slightly in the shape of the orifice.

Hippopodina tahitiensis is an encrusting, calcified bryozoan colony composed of many individual zooids. The zooids feed by extending the ciliated tentacles of the lophophore as a funnel, creating a current, and driving food particles into their mouths. The food is guided along the tentacles and through the pharynx by the cilia. Larger food particles can be moved or captured by flicking or contracting the tentacles (Barnes 1983). Hippopodina tahitiensis belongs to a taxonomic group which has lecithotrophic larvae which settle very quickly after release). Larvae settle on a substrate and usually metamorphose into an ancestrula. The ancestrula has not been described, but that of H. irikiriensis has three lobes, (Eitan 1972), but that of H. tahitiensis has not been described (McCann et al. 2019).

Ecology- Hippopodina tahitiensis was described from a pearl oyster (Pinctada margaritifera (Leca and d'Hondt 1999), and from fouling plates in marinas and docks in the Galapagos (McCann et al. 2019).

No ecological or economic impacts have been reported for Hippopodina tahitiensis.

Hastings, Anna B. (1930) Cheilostomatous Polyzoa from the vicinity of the Panama Canal, collected by Dr, C. Crossland on the cruise of S. Y. St. george, Proceedings of the Zoological Society of London 47: 697–750