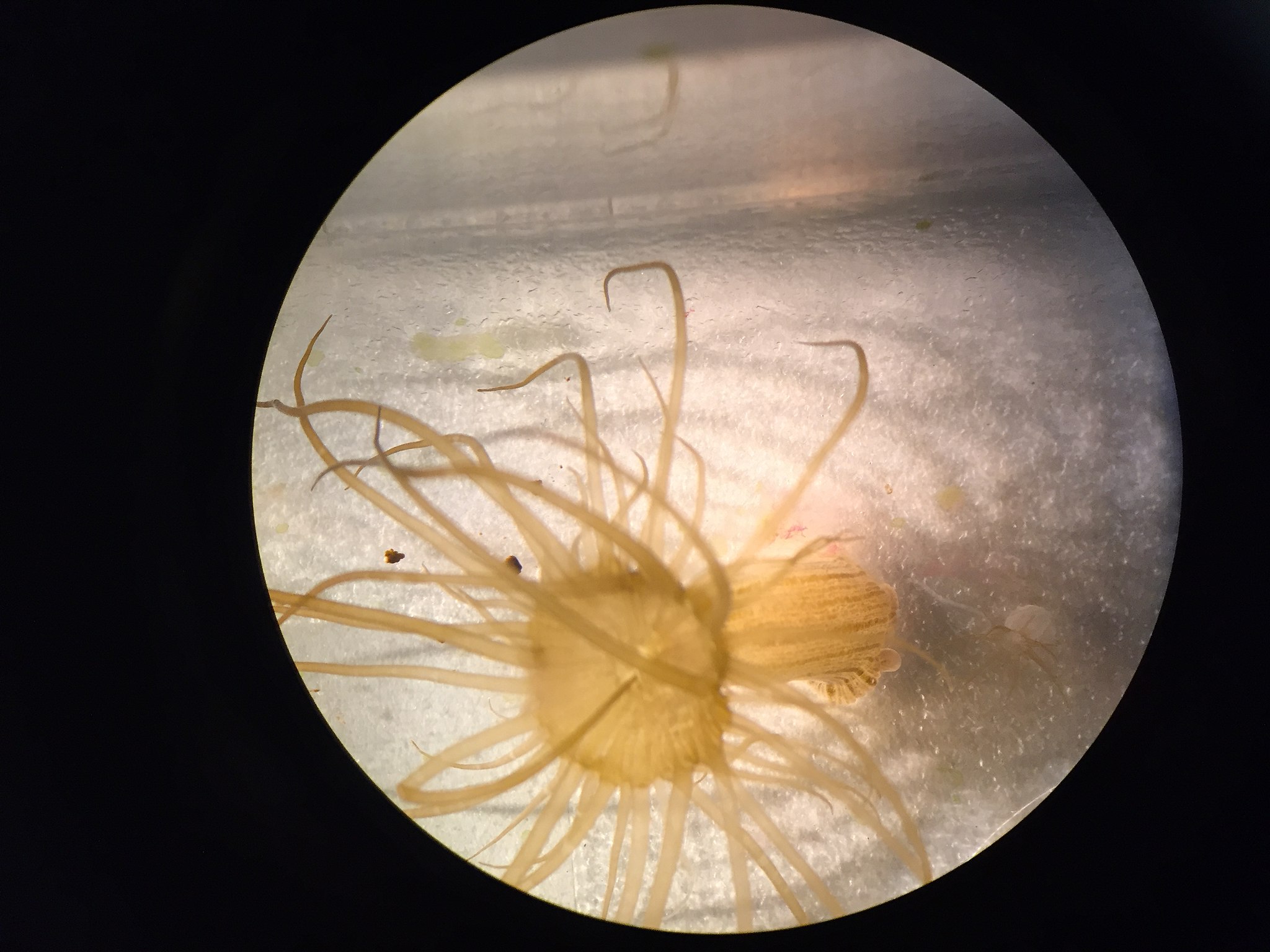 The Glass Anemone, Exaiptasia pallida is widely studied, in part because of their symbiotic relationship with dinoflagellates, but also has an important role in research in the biology of coral reefs and bleaching. It has a remarkably widespread distribution with scattered populations around the world, mostly in subtropical and tropical habitats. Because of its widespread distribution it has been described many times and thus has many synonyms. It reproduces both asexually by pedal laceration and sexually with external fertilization and planula larvae. In pedal laceration is when a portion of its base is left behind and grows into a new anemone as the anemone moves. This species is capable of rapidly colonizing aquaria and natural habitats.

The Glass Anemone, Exaiptasia pallida was described in 1864 by Agassiz from Charleston, South Carolina, as Dysactis pallida. It had been described earlier from Naples, Italy by Rapp in 1829, as Actinia dipahana, but this description was largely overlooked. As this anemone became widespread around the world, it was described many times and thus has many synonyms. Populations and their symbiotic dinoflagellates in the tropical and subtropical West Atlantic have many geographically isolated clades, while many populations in more remote regions are genetically more similar (Thornhill et al. 2013; Glon et al. 2020). We are following Glon et al. (2020) in treating the species as native from North Carolina to the Caribbean and Brazil, but introduced in the Mediterranean, the Suez Canal, Japan, and Hawaii (as Aiptasia pulchella), California to Mexico (as Aiptasia californica) (Carlgren 1953), Pacific Panama, the Galapagos, St. Helena (as Aiptasia insignis), and South Africa (Grajales and Rodriguez 2014; Glon et al. 2020).

Exaiptasia pallida occurs in subtropical and tropical waters, usually at 0-5 m depth, in rocky habitats, mangrove roots, dead corals, marinas, etc. The Glass Anemone's prolific asexual reproduction, sexual reproduction of planktonic larvae, tolerance of variable temperatures and salinities, and the ability to obtain nutrition from symbiotic photosynthetic dinoflagellates, enable it to rapidly colonize shallow-water habitats. The most widespread vectors for its spread are hull fouling and larvae in ballast water (Thornhill et al. 2013l Glon et al. 2020). However, in the Bay of Biscay and Mediterranean France, it was associated with introduced Pacific oysters from Japan, as Aiptasia pulchella (Grizel and Heral 1991; Ardura and Planes 2015). It is also well-known as an aquarium pest, because of its asexual reproduction and photosynthetic symbionts (Glon et al. 2020). Aquarium releases are a possible vector for some recent invasions.

The worldwide distribution of Exaiptasia pallida and its complex synonymy, as well as the wide distribution of its dinoflagellate symbionts, makes it challenging to define its native region. However, its more continuous distribution in the West Atlantic, and the occurrence of some unique clades and symbionts that are unique to Florida populations suggest greater generic diversity and support the tropical West Atlantic as the region of origin (Thornhill et al. 2013; Glon et al. 2020). Some of the invasions were very early, for example, its description in Naples, Italy in 1849 (as Dysactis diaphana). However, many of the early records (Agassiz in Verrill 1864; Coues and Yarrow 1878) were from the Western Atlantic (Coues and Yarrow 1878; Yale Peabody Museum of Natural History 2020; US. National Museum of Natural History 2020). The exception is its collected in Bermuda in 1878 (Yale Peabody Museum of Natural History 2020), where we consider it cryptogenic.

In the Eastern Pacific, as noted above, Exaiptasia pallida was introduced and established in California and Pacific Mexico but has disjunct populations in Panama (before 2014) and Hawaii (1950). In 1995, it was discovered forming extensive 'anemone meadows' (Okey et al. 2003; Carlton et al. 2020). In the Northwest Pacific, it is known from Taiwan and Okinawa (Grajales and Rodriguez 2020). Probably, it is established elsewhere in Japan, such as Sendai Province, the source of the Pacific Oysters (Crassostrea gigas) introduced to France (Grizel and Heral 1991). In the Indo-Pacifc, E. pallida was collected on Ralik Chain, Eniwetok Atoll, in the Marshall Islands Marshall Islands in 1955, (as Aiptasia pulchella), U.S. National Museum of Natural History 2020). In 2003, it was discovered in Jellyfish Lake, an important tourist attraction on Eil Malk island, Palau. It is known both from the Great Barrier Reef, near Townsville, Queensland (Tortorelli et al. 2020), and in the Gulf of St. Vincent, South Australia (GBIF 2020). In the Indian Ocean, it was collected in the Suez Canal in 1924 (GBIF 2020), near Mumbai (Bombay), India in 1950, and is established there (US National Museum of Natural History 2020; GBIF 2020). It is also established in East London, South Africa/Indian Ocean (1935, Swedish South African Expedition 1935, cited by Grajales and Rodriguez 2014).

The earliest known introduction of Exaiptasia pallida appears to be its description as Dysactis diaphana by Rapp in 1829) near Naples. It appears to be established in the Tyrrhenian Sea, from Naples to the tip of Sicily, but does not appear to be widespread on the Italian Coast. In the 1960s and 1970s, Pacific Oysters from Japan were introduced to the Bay of Biscay, France and to French Mediterranean lagoons. Though these anemones are often associated with oyster introductions, they did not become established in the Bay of Biscay (Grizel and Heral 1991; Goulletquer et al. 2002). They have become established in the Canet-Saint Nazaire lagoon, Mediterranean (Ardura,et al. 2015). In the subtropical-tropical Eastern Atlantic, E, pallida was collected in Madeira in 2008 (Canning-Clode et al. 2015), in the Canary Islands (Grajales and Rodriguez 2014), and Senegal in 2019 (GBIF 2020). In 1930, this anemone was collected on the mid-Atlantic island of St. Helena (Grajales and Rodriguez 2020).

Exaiptasia pallida (Agassiz in Verrill 1864), called the Pale Anemone, Glass Anemone is native to subtropical and tropical waters of the Western Atlantic, but widely distributed around the world (Glon et al. 2020). An earlier description, from Naples by Rapp (1829), as Dysactis diaphana was rarely used. Grajales and Rodrigues (2013) petitioned the International Committee on Zoological Nomenclature to validate the species name pallida, arguing that the frequency of use outweighed historical priority. This petition was overruled by the committee in 2017, however, the name pallida is treated as valid by the World Registry of Marine Species (WoRMS, Appletans et al. 2020). Currently, this petition is being appealed. This anemone has been widely studied and published under the name pallida, which was the name used in Glon et al. (2020), and in this account.

Anemones of the family Aiptaisiidae have been widely studied, in part because of their symbiotic relationship with dinoflagellates. These anemones have a well-developed pedal disk, basal muscles, and longitudinal muscles. Exaiptasia pallida, the only species in the genus Exaiptasia (Grajales and Rodriguez 2014), has a regularly shaped pedal disc, with a column that is not divided into scapus and capitulum. It reproduces sexually and by pedal laceration. They harbor symbiotic dinoflagellates of the genus Symbiodinium. The pedal disk is up to 10 mm wide and is wider than the column in living specimens. The column is smooth and up to 60 mm high in living specimens, when extended, and up to 30 mm in preserved specimens. The oral disk is up to 10 mm in diameter. There are up to 96 simple tentacles, which lack projections, taper towards the tips, and are all of uniform length (up to 20 mm). The column is graysih-brownish, with scattered spots and translucent toward the base. The oral disk and tentacles are grayish, the tentacles have occasional white transverse stripes. The mouth is white and the actinopharynx is yellowish (Carlgren 1952; Grajales and Rodriguez 2014).

The Glass Anemone Exaiptasia pallida reproduces both asexually by pedal laceration and sexually, with external fertilization and planula larvae (Jennison 1983). In pedal laceration, as the anemone moves, a portion of its base is left behind and grows into a new anemone (Barnes 1983). This species is capable of rapidly colonizing aquaria and natural habitats (Okey et al. 2003; Glon et al. 2020).

Exaiptasia pallida ranges from warm-temperate to tropical climates, tolerating temperatures up to 42 C and salinities as high as 60 PSU (Gegner et al. 2017). Its tolerance to lower temperatures and salinities is not clear, but its occurrence in mangroves and shallow-water habitats probably implies tolerance of salinities below 30 PSU (Kaplan 1988; Glon et al. 2020). Exaiptasia pallida is known from a wide range of substrates, including rocks, mangrove roots, algal-coral beds on reef-flats, and marinas (Kaplan 1988; Okey et al. 2003; Acuna et al. 2020; Glon et al. 2020). Exaiptasia pallida is a predator, feeding on zooplankton and small mobile benthos with the nematocysts on its tentacles. However, it also benefits by photosynthesis by its dinoflagellate symbionts, or zooxanthellae. It can host a varietty of dinoflagellates of the genera Symbiodinium, Durusdinium, and has become model organism for studying the relationship between corals and their symbionts (Thornhill et al. 2013; Foo et al. 2020; Gabay et al. 2020; Herrera et al. 2020). In Florida, E. pallida is eaten by a native nudibranch, Breghia coerulescens (Kaplan 1988). A number of species of fishes, and Hawksbill Turtles (Eretmochelys imbricata) feed on these anemones in the Galapagos (Okey et al. 2003).

Exaiptasia pallida is a remarkably widespread anemone, with many scattered populations around the world, mostly in subtropical and tropical habitats. It has an important role in research in the biology of coral reefs and bleaching, because it is easier to study symbiosis in a small anemone than in intact corals (e.g., Medrano et al. 2018). Exaiptasia pallida has also spread invasively in several coral-reef and algal communities of great tourist and biodiversity value.

Competition, Habitat Change- Exaiptasia pallida has spread rapidly in at least two regions of great touristic and economic value. On reef flats around Fernandina Island in the Galapagos Islands, E. pallida replaced communities of algae and corals with 'anemone barrens', with lower biodiversity and visual appeal (Okey et al. 2003). Similar impacts on biodiversity and tourism were observed in Jellyfish Lake, Palau, a marine lagoon which attracts tourists for its dense populations of non-stinging jellyfish (Mastigias sp. Dense cover of anemones were associated with decreased abundance of algae and invertebrates (Marino et al. 2008).

Carlgren, Oskar; Hedgpeth, Joel W. (1952) Actinaria, Zoantharia, and Ceriantharia from shallow water in the northwestern Gulf of Mexico., Publications of the Institute of Marine Science 2(2): 141-172